The Transient Hot Wire Liquid Thermal Conductivity Meter (THW-L1) is a precision analytical instrument for directly measuring the thermal conductivity of liquids and low viscosity pastes, from 10 to 200°C. 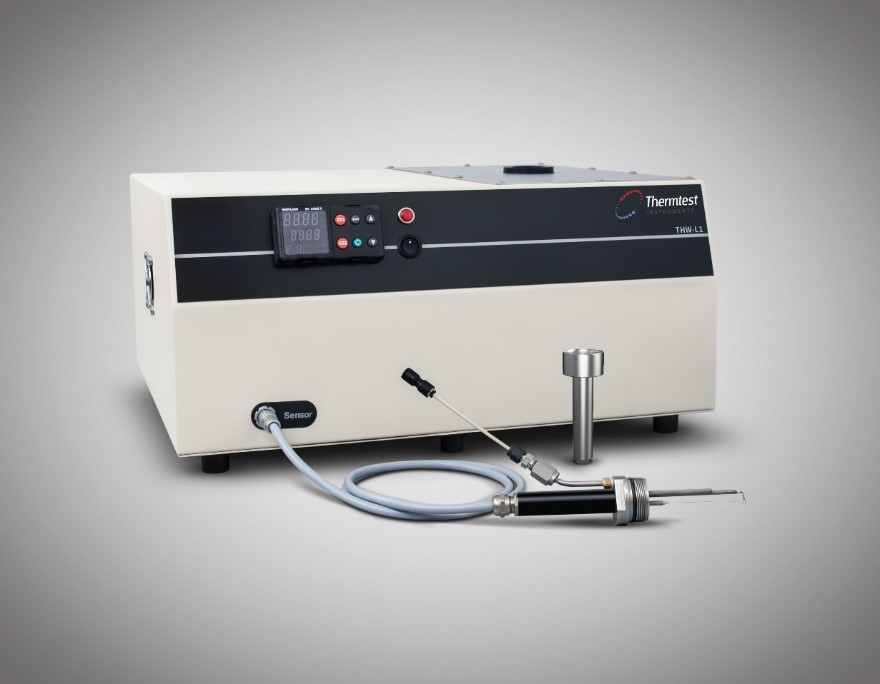 The THW-L1 Meter was designed with speed and operational simplicity in mind. With a single measurement of 1 second in duration, small volumes of liquids and low viscosity pastes can be accurately and precisely measured for thermal conductivity, thermal diffusivity, and specific heat. The THW-L1 Meter uses a non-stationary measurement approach and rapid test times, limiting convective effects for samples with a wide range of viscosities (0.1 to 10,000,000 mPas).

The THW-L1 software lets the user investigate the quality of the measurement, which is important in identifying poor results.

For electrically conductive liquids which affect the accuracy of a measurement, often the starting first few points of the temperature rise vs. time raw data are offset below graphed zero. As shown in Figures 1a, when the electrical conductivity does not affect the accuracy of a measurement, the temperature rise graph starts from positive temperatures. On the other hand, when the fluid’s electrical conductivity of the fluid is high enough for a current, a negative offset appears to the results (Figure 1b). 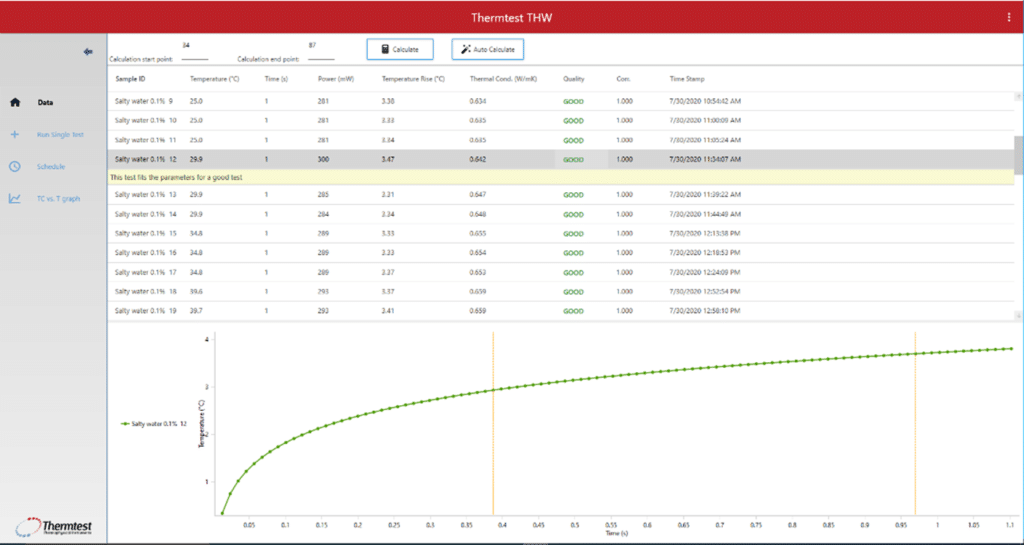 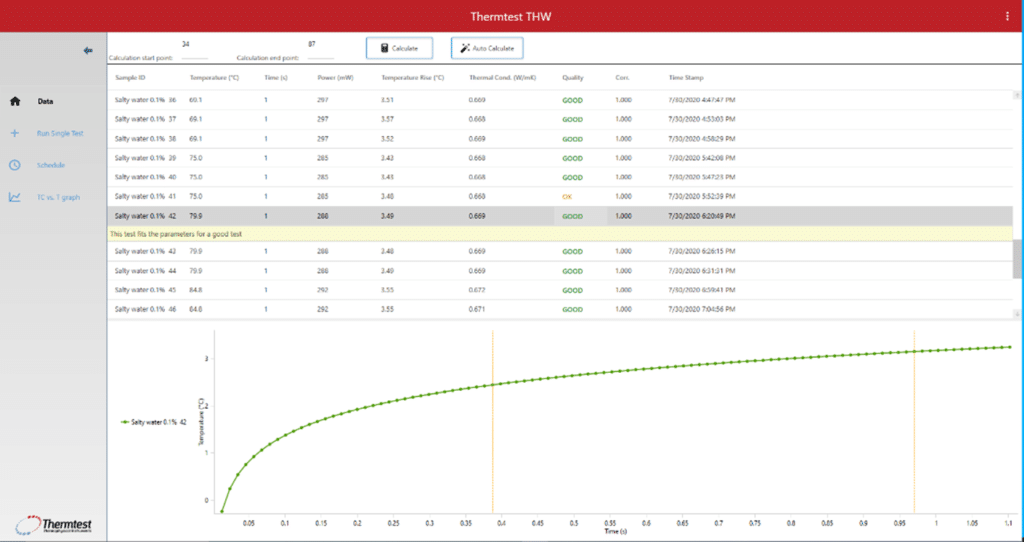 The figures below show the experimental results of two salt-water mixtures of 0.1% and 2%, measured with the THW-L1 and a competitive transient hot-wire instrument (we will refer to as THW-F). In Figures 2-5, the green measurement points show that the experimental data is not affected by the fluid’s electrical conductivity. In contrast, the red measurement points show the experimental data, when the fluid’s electrical conductivity is high, as demonstrated above in figure 1b. The THW-F sensor has no option for the user to review the quality of the measurements.

As shown in Figure 2, the experimental data of salt-water is 0.1%. Since the electrical conductivity of this mixture is low (2.2 mS/cm), both a THW-L1 Stainless Steel (standard) and a THW-L1 anodized aluminum (optional) test cell are used during the measurements. As can be seen, the anodized test cell allows more accurate thermal conductivity measurements at higher temperatures; this is due to the anodizing providing a basic level of electrical insulation. The black line represents the control sample (DIUF water) measurements with the THW-L1 sensor. 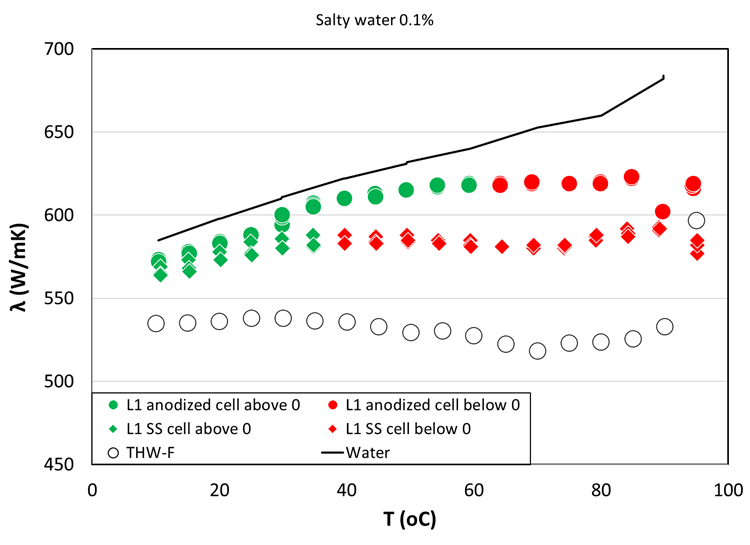 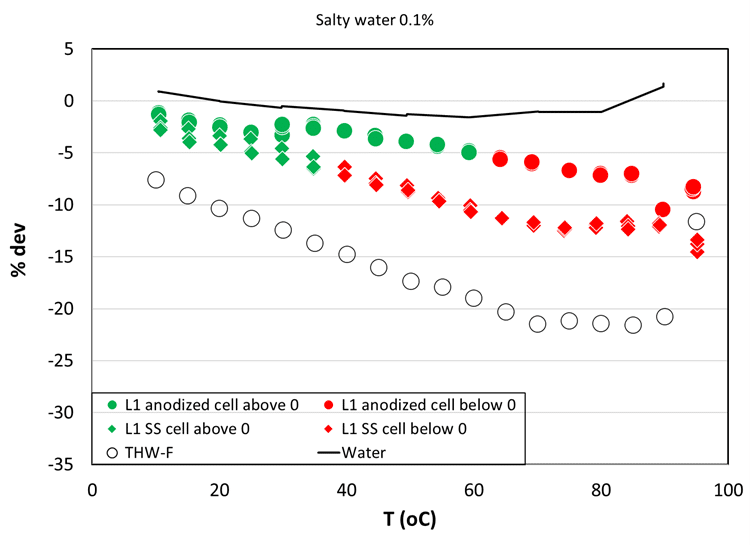 Figure 3. Deviations of the Thermal Conductivity measurements with the literature data of salt-water mixture 0.1% using the THW-L1 device with an anodized cell, a basic SS cell, and a THW-F device. 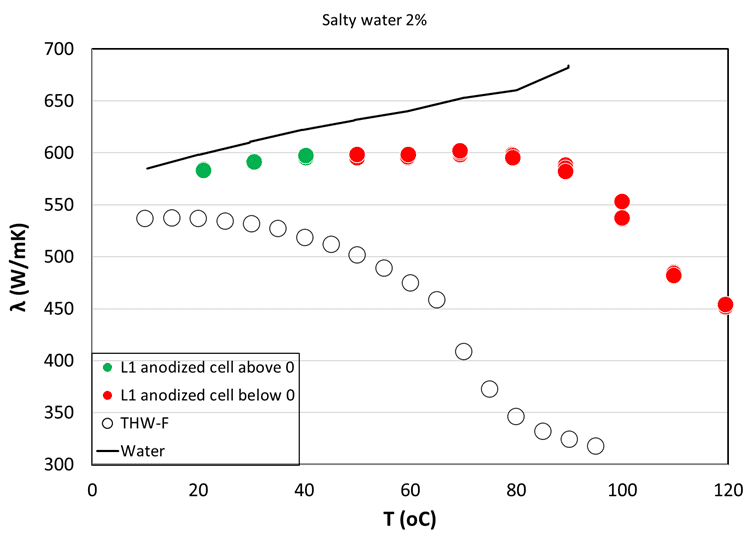 Figure 4. Measured Thermal Conductivity of salty water mixture 2% using the THW-L1 device with an anodized cell and a THW-F device