Water is a molecule composed of hydrogen and hydroxyl ions, when together forms H2O. Water that comes from a faucet contains ions that are naturally found in soils; such as iron, copper, calcium, and sodium. Using tap water containing impurities during a laboratory experiment could potentially alter a product’s chemical composition. As the name suggests, deionization is the process of removing these charged ions – leaving nothing but the water molecule in its purest state. Deionized ultra-filtered (DIUF) water is a readily available solvent that has well-characterized thermal properties over a range of temperatures.

ABOUT THE THW METER 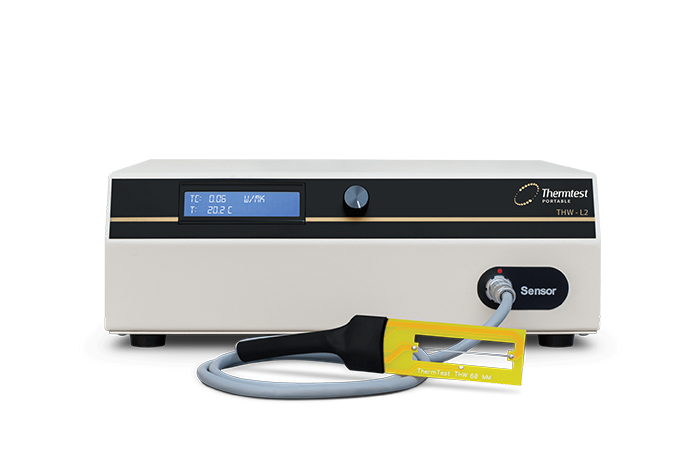 Based on the transient hot wire (THW) technique, Thermtest’s Liquid Thermal Conductivity Meter (THW-L2) is an advanced measurement system for the direct determination of thermal conductivities of liquids and pastes in accordance with ASTM D7896 -14. The THW-L2 measures the thermal conductivity of liquids and pastes from 0.01 to 2 W/m·K, and between temperatures of -50 to +100 °C. Additionally, the THW-L2 uses a transient measurement approach and rapid test times of one second to limit convective effects for samples with a wide range of viscosities. With a thin heating wire that acts as both a sensor and heat source during measurements, this method ensures accurate results within 5%, and excellent reproducibility, typically better than 2%. 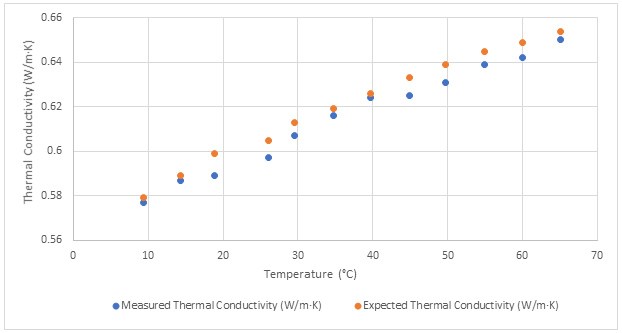 As the manufacturer of the THW-L2 suggests, users can expect an accuracy of ±5% and reproducibility of ±2%. As can be seen in Figure 4, the thermal conductivity readings of the measured DIUF water sample from 0˚C to 65˚C were all within 2% of the actual DIUF values.