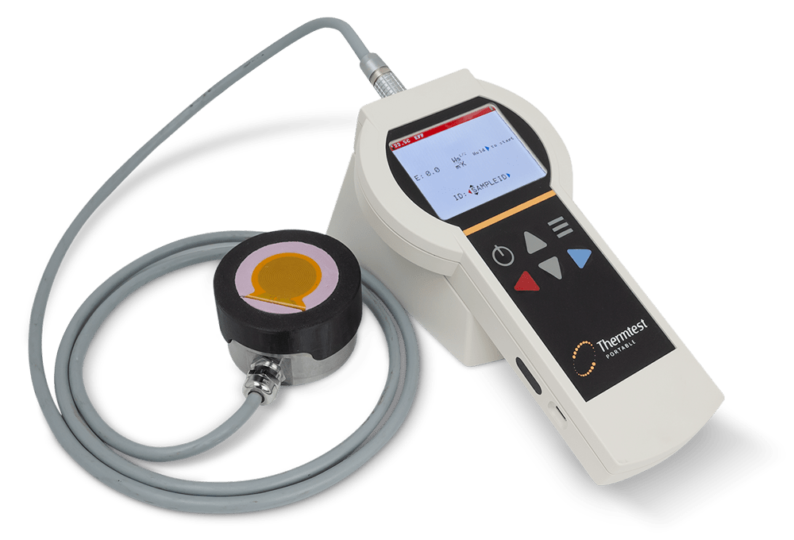 Thermal effusivity is most typically measured to predict how ‘cool’ or ‘warm’ a material feels. It has a square root proportionality to the density, thermal conductivity, and specific heat capacity of the material. Highly dense samples of materials with high thermal conductivity and specific heat capacity values have high thermal effusivity values, and this is also the case the other way around.

In this experiment, liquids in sample bags were measured for thermal effusance using a TPS-EFF meter and compared to their corresponding value in the materials database, see Figure 1. A test time of 10 seconds was used in the hopes of obtaining a value that minimizes the effect of contact resistance and is more representative of the bulk of the sample, not the sample bag itself. If this is an effective method for measuring the thermal effusance of liquids, the values obtained from measurement should be very close to the database values.

Figure 1. A comparison of thermal effusance / effective thermal effusivity between measurements of liquids in sample bags with a touch time of 10 seconds and the Thermtest Materials Database value.

The results indicate that the measured apparent thermal effusivity and known thermal effusivity from the Thermtest database are very similar. A discrepancy of 2% was observed for relatively viscous materials (motor oil, silicone, and glycerol), while a 7% discrepancy between the measured and known value was observed for water. This is likely due to convection in the samples during measurement. A measurement is 10 seconds in duration, allowing ample time for convection to occur in liquids that are low in viscosity. Another source of error is the sample bag itself, although it is comparatively thin to the liquid sample and does not seem to affect the results significantly.

Based on these findings, it appears that the thermal effusance of sufficiently viscous liquids can be accurately measured with the TPS-EFF using this method.

TPS-EFF has a 5% accuracy and a 2% reproducibility, making it a highly accurate and precise instrument for measuring thermal effusivity of textiles and other materials.