Metal foams are lightweight, porous materials that have the potential to be used in many applications due to their low thermal conductivity, high strength, and ability to absorb and cushion impacts (Figure 1). The automobile and aerospace industries in particular are areas where these materials have the potential to excel. Today, numerous types of metal foams are available on the market and they are manufactured through a variety of processes. The variation in production methods and products has lead to concerns about product quality, which some say is holding this class of materials back from their full potential in industries where safety and quality control is paramount. In-homogeneities in metal foams can cover anything from large pores to an extra thick skin. A range of non destructive techniques have been tested to determine their efficacy in determining whether metal foams have some of these abnormalities. Rodriguez-Perez et al. (2003) performed research using the Hot Disk Transient Plane Source to not only determine the thermal conductivity of metal foams with different densities, but to also explore whether this equipment could be used as an effective quality control mechanism for metal foam production. This research is an excellent example of the range of applications the TPS thermal conductivity equipment is capable of. 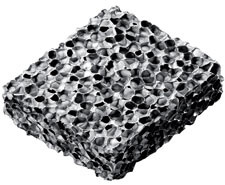 Figure 1. An aluminum metal foam1; aluminum is one of the most common metals used in metal foam production.

Rodriguez-Perez et al. (2003) created six AlSi7 metal foam samples through the powder compact melting route (Figure 2). A variety of densities between 564 and 1339 kg/m3 were obtained by foaming the samples at different temperatures and lengths of time. For thermal conductivity testing, the researchers sandwiched a 9.719 mm radius Hot Disk probe between two identical pieces of a sample, and applied a current of 0.4 W for 16-25 seconds (Figure 2).

For in-homogeneity quality control testing, the team used one metal foam sample piece and a reference material composed of AlSi7Mg0.3 solid alloy to surround the Hot Disk probe. These tests, performed at 23°C, used an output power of 0.2 W and were 10 seconds long. Researchers measured every face of each sample piece, and recorded the change in temperature at the surface of the sample contacting the Hot Disk sensor during the test. Their reasoning in using this as  a quality control method was that if there were no in-homogeneities present, the temperature difference should be the same at all surfaces since the heat would be pulled away from the sensor at the same rate. However, any abnormalities would affect how heat moves through the foam, and less or more heat might be present at the surface at the end of the test, enabling their detection.

Figure 2. Images from Rodriguez-Perez et al. (2003) showing their six AlSi7 foam samples, and the experimental set up that they used to measure thermal conductivity using the Hot Disk TPS.

The single sided sensor, the TPS-S, is ideal for in-homogeneity testing, as it only requires one sample piece and therefore is excellent for applications such as this where the sample cannot be cut (Figure 3). Another method of testing for in-homogeneities in materials using the Hot Disk TPS involves taking thermal conductivity measurements at various sections along the material piece (Figure 4). A sample with no abnormalities should have the same thermal conductivity regardless of where the sensor is placed. However, if an anomaly such as a void is present, the resulting thermal conductivity would be much lower, signaling to the researcher that the section where the sensor was placed had a different structure than those around it.

Figure 3. The TPS-S single sided sensor is easy to use, performs the same measurements as the two sided sensor, and requires only one sample piece.

Using the Hot Disk TPS thermal conductivity testing system, Rodriguez-Perez et al. (2003) found that thermal conductivity increased with the density of the foam (Figure 5). However, even the highest thermal conductivity value of 50 W/mK was 3 times smaller than the thermal conductivity of a solid alloy of similar composition. For in-homogeneity testing, the researchers discovered that some samples had similar values regardless of the direction of test, while others had substantial differences. Table 1 shows the results obtained from tests in different directions (+Y, -Y, -Z, +Z). As an example, the team suggested that sample 4c may have some in-homogeneity present due to the variation in values retrieved, while sample 6b had similar values in all directions and therefore potentially had better homogeneity throughout the structure (Figure 6). 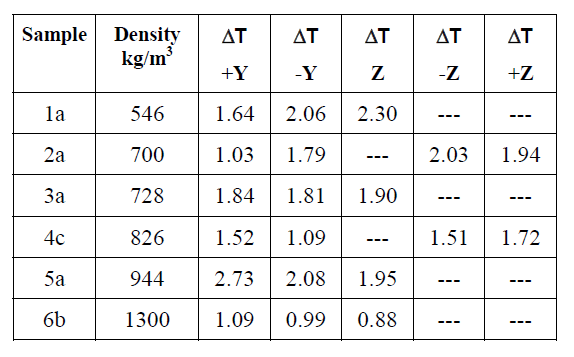 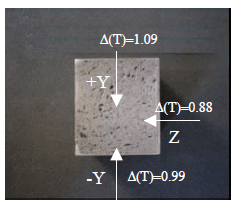 Figure 6. Photo from Rodriguez-Perez et al. (2003) showing the direction of measurements used to test for in-homogeneities and the similar temperature differences obtained at each surface.

With this research, Rodriguez-Perez et al. (2003) were able to successfully measure the thermal conductivity of metal foams using the Hot Disk TPS, and lay the groundwork for future research using the TPS as a quality control mechanism.

A selection of metal foam manufacturers is provided for further product information: