Figure 1. Examples of products, in this case a frying pan1 and a heat exchanger2, that are manufactured from metal due to its high thermal conductivity.

The creators of Hot Disk have continually strove to provide a product that meets the needs of their customers in a reliable, convenient, and efficient way. Soon after the development of the method, they decided to evaluate the ability of the system to test the thermal conductivity of thin pieces of metal, realizing that many clients would have either highly expensive pieces of metal to test, or have a sample whose production limited the size it could be manufactured to. Since many metals are produced as thin sheets, being able to test their thermal conductivity in that form would be highly beneficial. Gustavsson et al. (1994) were aware that the probing depth was crucial for this type of testing, as the transient plane source functions on the assumption that the heat from the hot disk probe does not reach the edge of the sample during the test. Due to the low thermal conductivity of the air (0.025 W/mK) surrounding the metal slabs, it was determined that the amount of heat lost to the surroundings at the edges of the metal samples would be negligible compared to the amount of heat delivered into the sample. Keeping with the same principle, the modern setup for testing thin materials includes placing blocks of insulation on the outer side of each sample piece to reduce heat lost to the environment.

Gustavsson et al. (1994) used the Hot Disk sensor that is easily recognizable today, a thin nickel foil surrounded by a Kapton insulator (Figure 2). The researchers tested five different metal samples: copper and aluminum with thicknesses of 2 mm and 4mm each, and a brass sample with a thickness of 4 mm. The diameter of every sample piece was 60 mm. Test time was kept to over 3 seconds; researchers wanted to be able to omit initial contact resistance between the sensor and sample, and they wanted enough points for reliable statistical analysis. The Hot Disk sensor was sandwiched between two identical pieces of each metal being tested and data on the thermal conductivity, specific heat, and thermal diffusivity was collected (Figure 2).

Figure 2. Illustration showing a Hot Disk sensor similar to the one used by Gustavsson et al. (1994) on the left, and a diagram displaying the traditional testing set up for a two sided sensor on the right.

Through this research Gustavsson et al. (1994) determined that it was possible to accurately test the thermal conductivity of thin metal samples using the Hot Disk TPS, after ensuring that the heat loss from the boundaries of the samples was trivial compared to the heat input from the sensor. They also determined that the diameter of the sample necessary for a successful test was directly related to the thermal diffusivity of the material being tested, materials with lower thermal diffusivities did not need as large of a sample diameter as those with higher values. This research paved the way for the development of the slab module for testing highly conductive thin sheets (Figure 3), enabling the TPS method to be useful in an entirely new area of thermal conductivity testing. 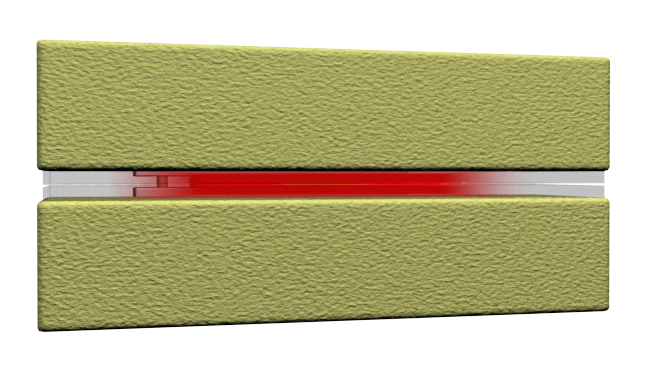 Figure 3. Illustration showing the slab module set up used for testing the thermal conductivity of thin sheets of highly conductive materials. Insulation is placed on either side of the material being tested to ensure heat loss to the environment during the test is minimal.

In performing this work Gustavsson et al. (1994) not only added to the capabilities of the Hot Disk TPS system, but contributed to the long history of research and development on the TPS method that has made it the ideal system for testing thermal conductivity on a variety of materials. The Hot Disk TPS systems are capable of testing the thermal conductivity, thermal diffusivity, and specific heat of solids, liquids, pastes and powders. They are renowned for their quick test times, and their enviable accuracy and reproducibility. Today, there are numerous modules that enable the TPS method to be incredibly versatile in its testing capabilities, these include an anisotropic module, a direct specific heat module, a 1-dimensional module, and the thin film module in addition to the slab module.