Contrary to their simple appearance, ice rinks are highly specialized and meticulously planned facilities incorporating industrial refrigeration systems. Operating costs of ice rinks can be enormous, and the energy costs of running the cooling equipment can account for over 50% of the total operating budget of a rink. Under the ice surface is a system of layers starting with a concrete slab containing cooling pipes, which circulate a refrigerant such as brine to draw heat away from the ice surface and release it in a different area (Figure 1). This concrete structure has a large influence on the energy costs of the rink; the higher its thermal resistance, the lower the temperature of the brine, which in turn reduces the evaporation temperature and increases the energy needed to run the refrigeration system. Improving the thermal performance of this concrete slab could greatly enhance the energy efficiency of the rink. In 2014, Haghighi et al. from the Royal Institute of Technology in Sweden performed research using the Hot Disk Transient Plane Source thermal conductivity system with the goal of creating a concrete with a higher thermal conductivity than conventional concrete for use in ice rink floors. 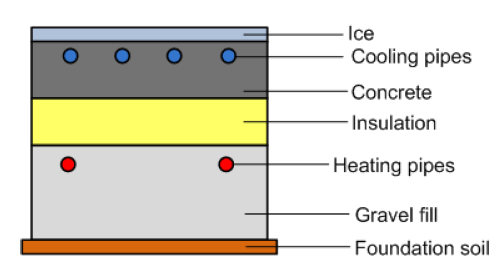 Figure 1. Arrangement of layers typically present in the structure under the ice surface.

Haghighi et al. (2014) created their concrete by replacing the aggregate material used in the mixture, commonly sand or gravel, with highly thermally conductive iron ore. The novel concrete then underwent freezing and strength tests required for ice rink operations. The amount and exact type of iron ore used was in the process of patent application at the time of publication and was not detailed in the report.

Thermal conductivity and thermal diffusivity measurements of the concrete were performed with the Hot Disk TPS 2500 S, a state of the art thermal conductivity testing system capable of measuring thermal conductivity from 0.005 to 1000 W/mK in a temperature range between -160°C to 1000 °C. Haghighi et al. (2014) sandwiched a two-sided Hot Disk sensor between two pieces of concrete for testing (Figure 2). The set up was then covered to prevent any environmental factors from influencing the results (Figure 2). The same test method was used to test conventional concrete for use as a reference. A single sided sensor, the TPS-S, is also available for use with Hot Disk equipment (Figure 3). This sensor performs the same measurement as the two-sided sensor with only one sample piece, and is an excellent option for clients with samples that are difficult to cut or expensive to produce.

Figure 2. Photos from Haghighi et al. (2014) of the test set up they used to measure the thermal conductivity of concrete samples with the Hot Disk TPS 2500 S.

Haghighi et al. (2014) discovered that the thermal properties of the iron ore concrete they had created were much improved from those of conventional concrete. Thermal conductivity had increased by 58.2%, thermal diffusivity by 15.5%, and specific heat by 37% (Table 1). These results indicate that this product could be highly useful in ice rink applications, as the improved conductivity and diffusivity will lower the thermal resistance of the slab and increase its ability to respond to temperature changes. Haghighi et al. (2014) did not stop their research with the creation of the specialized concrete, they also designed two alternative floor structures that could use this product while minimizing construction costs. Energy modelling with these designs showed that thermal efficiency was increased and operating costs were reduced.