The use of graphite dates back many hundred years, and may possibly have been used in some cases before the advent of written records. The first written record of the use of graphite was in the early sixteenth century in Borrowdale, Cumbria, England where a large deposit was discovered. The graphite was originally used to mark sheep, but soon found its use in the English Navy as a mould for cannonballs which resulted in rounder balls which could be fired further. Graphite is an allotrope of carbon, and early on was confused with its periodic table group member, lead, which resulted in graphite historically being called black lead or plumbago (from the latin word for lead, plumbum). This confusion was clarified in 1789 when German chemist and mineralogist A. G. Werner coined the term graphite to refer to the dark coloured, soft, malleable allotrope of carbon.

The production of synthetic graphite began in 1897 with a patent received by American chemist Edward Goodrich Acheson. This process involved the heating of carborundum (silicon carbide, SiC) to over 4,150 °C in order to vaporize silicon and produce carbon in the form of graphite. This early method of synthesis has evolved significantly over the past century to the processes now used by companies such as Mersen and Asbury to produce high quality, high purity graphite.

Graphite has been investigated for many decades due to its impressive thermal, mechanical and chemical properties. These impressive properties are all due to graphite’s chemical structure, which consists of hexagonal layered sheets of sp2 hybridized carbon atoms arranged in a honeycomb lattice. The chemical bonds within each plane are very strong, with carbon-carbon bond lengths on the order of 1.42 Å which is indicative of a very strong chemical bond. The distance between layers is on the order of 3.35 Å. A single layer of graphite is known as graphene, which is currently generating huge amounts of research due to its amazing properties.

While graphite has incredibly strong bonds between carbon atoms in the same layer, interlayer interactions are limited to van der Waals forces.  It is these weak interactions that lead to the use of graphite as a writing material, and explain why bulk graphite is easily breakable. Due to the weak interactions between layers, when pressure is applied (pushing a pencil against a piece of paper) layers of graphite slide off to leave marks on paper. 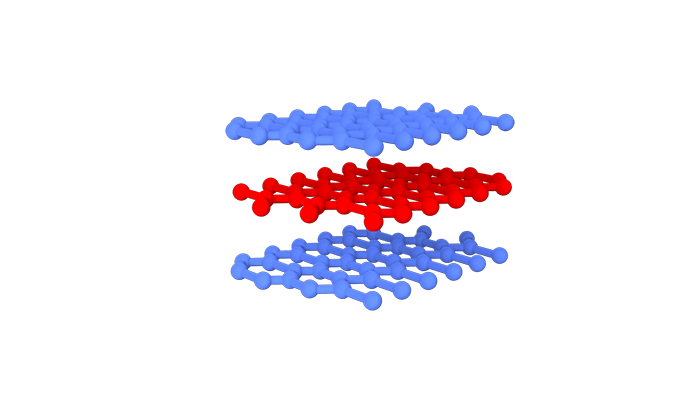 Figure 1. Side view of graphite layered stacking. Each individual layer is a graphene sheet.

Figure 2. Top view of graphite layered stacking. Each layer is slightly offset from the one before and so the first and third layers line up and the second and fourth layers line up.

The synthesis of graphite nanosheets and nanoplatelets has been a hot topic in the nanotechnology world in the past couple decades and there are a variety of methods that can be used to make nano-sized graphite. These methods include both chemical and mechanical processes. Antisari et al. have used the low energy pure shear milling method for the preparation of graphite nanosheets.1 This method involves the grinding of graphite powder in a mortar grinder for an extended period of time (up to 60 hours). An alternative method published by Sun et al. uses nitric acid and nitromethane in order to create an explosion to break the van der Waals forces holding graphite layers together, generating smaller sized particles.2

Due to the widespread applications for graphite nanosheets such as in cellular phones, computers, lighting, lithium-ion batteries, power conversion and other electronic devices, the thermal analysis of these materials is important. Panasonic manufactures and sells a special kind of graphite sheet called pyrolytic graphite sheets (PGS), which is a high thermal conductivity, highly oriented synthetic polymer film. PGS is used in many electronic devices as a heat spreader.

Multiple samples of Panasonic PGS of different thicknesses (25, 75 and 102 µm) were acquired and analyzed using the Hot Disk TPS 3500 Thermal Conductivity Instrument. The TPS Slab Method was used for the measurement of thermal conductivity of the graphite sheets (slabs). The TPS Slab Method is used to measure the thermal conductivity, thermal diffusivity and specific heat of thermally conductive thin sheets up to 1800 W/m·K. The TPS sensor is placed between the two slab samples and the outside slab surfaces are insulated with a low thermal conductivity backing to reduce heat losses to the surroundings. See Figure 3 for the experimental setup for slab measurements. 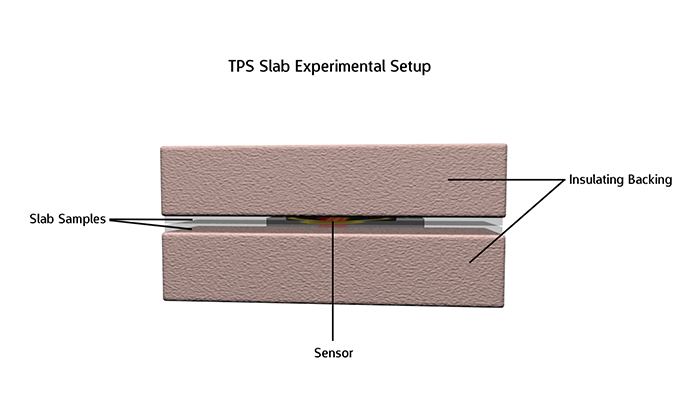 Test time and power output are especially important when performing thermal conductivity, thermal diffusivity and specific heat capacity measurements on slab samples. A test time must be chosen so as to not exceed the radial probing depth as the sample is assumed to be infinite in this plane. While some heat may be lost to the surroundings through the insulated backing, this heat loss is negligible compared to the total power output of the sensor.

Thermal conductivity was measured by the Hot Disk TPS 3500 and the experimental results are shown below in Table 1. The experimental values are also compared to the reported values by Panasonic. 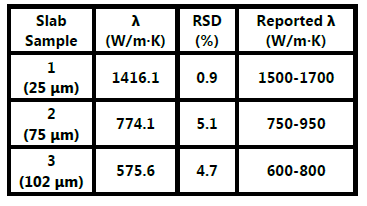