Fire resistance and protection are crucial elements of building design. Fire protection can be incorporated into structures both actively and passively; active fire protection measures include smoke alarms and sprinkler systems, while passive measures comprise of protective coatings on structural components, incorporating fire resistant materials into construction, and compartmentalizing the building layout. Protective coatings are designed to swell to form an insulating, protective layer between the steel structure and the fire to prevent it from heating to the point that it loses structural strength and can no longer support the building. These coatings save lives as they increase the amount of time available for evacuations and fire fighters to combat the blaze. Low thermal conductivity is an essential characteristic of these products. In 2013, Gardelle et al. undertook a study to create a protective coating that would outperform intumescent paint (Figure 1), the current industry favorite, by adding expandable graphite (EG) to a curable silicone based coating. 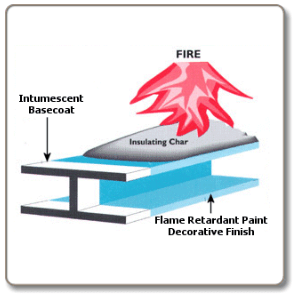 Figure 1. Illustration depicting how intumescent paint expands during a fire to provide an insulating barrier between the steel and the flame1.

Gardelle et al. (2013) created their EG/silicone coating by adding various amounts (5-25%) of expandable graphite at 5% intervals to a silicone resin. Samples of intumescent paint of the same size were also prepared for use as a reference. In order to study the performance of their product during a hydrocarbon fire, the team used a furnace performing at the UL1709 standard to stimulate the conditions. The critical temperature at which steel loses 60% of its original strength and can no longer support a regular structural loading is 500°C. 400°C is considered to be the critical temperature for a steel structure under heavy loading. The team measured the length of time it took for the steel to reach each critical temperature with the addition of each EG/S1 coating as a protective layer. The rate and velocity of expansion were measured to determine how the compound performed compared to intumescent paint.

Analysis of thermal conductivity was a crucial component of this project, as the thermal properties of the compound would determine how much heat the steel was exposed to during the test, and how quickly it would heat to the critical temperature. The Hot Disk Transient Plane Source 2500 S was used for thermal conductivity testing of the 25% EG/S1 coating along a temperature range from 25-500°C (Figure 2). The TPS 2500 S is a state of the art instrument that measures thermal conductivities from 0.005 W/mK to 1000 W/mK and can perform measurements at temperatures up to 1000°C. A variety of products, including furnaces and heat proof cables, are available from Thermtest to facilitate high temperature testing needs.

Figure 2. Set up that can be used for high temperature testing with the Hot Disk TPS. The Hot Disk sensor is sandwiched between two sample pieces. More than one sample can be tested at a time.

Note: For comprehensive results and a full discussion, please follow the link to this scientific paper in the reference section.