Sustainability is an important factor for professionals involved in building construction to consider in today’s world. As concrete is a major component in the majority of structures, methods to make it more environmentally friendly in both production and performance are continuously being explored. Standard concrete is composed of cement, water, aggregate, and chemical admixtures. Although aggregate makes up the largest proportion of the mixture, cement and water form the paste that hold it together. In recent years the concrete industry has been looking for materials to partially replace cement in concrete to save money and produce a greener product. Fly ash is produced during the combustion phase of coal-fired power plants, hence, its use in concrete production reduces the amount of material entering landfills from this practice and it prevents additional new materials from being used in concrete manufacturing. Bentz et al. (2007) from the National Institute of Standards and Technology, collected data on the specific heat capacity and thermal conductivity of concretes using different percentages of fly ash as a replacement for cement using the Hot Disk TPS thermal conductivity system.

Preparing to Test for the Thermal Conductivity of Concrete

Concrete samples were prepared using three different water-to-cementitious materials (w/cm) ratios of 0.5, 0.55 and 0.6 respectively. Each ratio had a sample made with 0, 15, 30, 45, 60, and 75% fly ash replacement of cement. A limestone based aggregate was used to complete the concrete. Each mixture was formed into two 101.6mm cubes which were cured for 28 days. The density of each set of cubes was determined before measurement of thermal conductivity began. Thermal conductivity testing was performed by cutting each concrete sample in half, and sandwiching a 6.403 mm Hot Disk sensor composed of nickel foil surrounded by Kapton between the two pieces (Figure 2). Thermtest also offers a single-sided sensor, the TPS-S, which only requires one sample piece to measure thermal conductivity; an excellent option for clients who have expensive or hard to cut materials (Figure 2). The Hot Disk Thermal Constants Analyzer is ideal for testing porous materials like concrete as it performs absolute measurements and does not require a contact agent. In order to account for the heterogeneous microstructure of the cubes, the probe was placed in eight different places between the two samples and the average thermal conductivity was calculated, with outlying values discarded. Specific heat capacities were calculated from the data provided by the system.

Figure 2. Diagram showcasing the position of the Hot Disk TPS sensor in relation to the concrete sample pieces on the left, and a demonstration of how the TPS-S single sided sensor works on the right.

The specific heat testing module that can be used alongside the Hot Disk TPS system obtained the specific heat values for the individual powders making up the concrete mixture. This module consists of a thermal sensor attached to a gold disc in which a sample is placed. The sensor and disc are surrounded by Styrofoam insulation to prevent heat losses to the environment affecting the results (Figure 3). 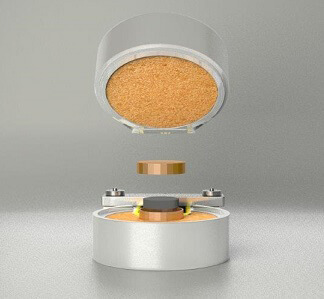 Figure 3. Illustration of the set up for the specific heat testing module available for the Hot Disk TPS Thermal Constants Analyzer System. 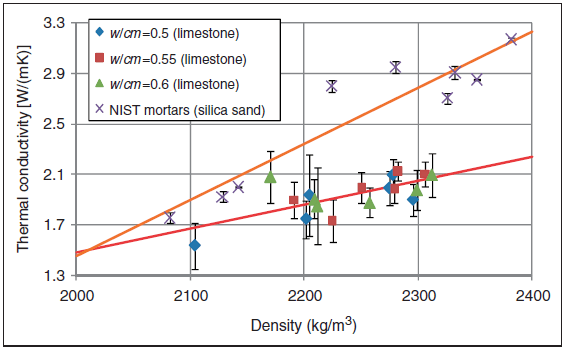 Figure 4. Graph of results taken from Bentz et al. (2007). The red line and surrounding symbols illustrate the decrease in thermal conductivity that accompanied the decrease in density due to the incorporation of fly ash into the cement mixture. [Note: this page discusses research performed on concrete by Bentz et al. (2007), to learn more about the work on mortars represented by the orange line of best fit please refer to the reference at the bottom of the page for the full paper].

This study concluded that replacing a proportion of cement with fly ash during concrete production results in a product with a lower thermal conductivity and thermal diffusivity. In practice, this type of concrete will contribute to increased thermal control in buildings, as a lower thermal conductivity makes it a better insulator. As a result less energy and money will be spent on heating and cooling practices, helping both the environment and the pocketbook.