When first approached about compiling a regular blog, specifically addressing the subject of the measurement of thermal conductivity and related thermal transport properties, my initial reaction was why, for whom and in what context that can it informative yet entertaining? It is a small, though highly important, technical fish in the very large heat transfer pond. 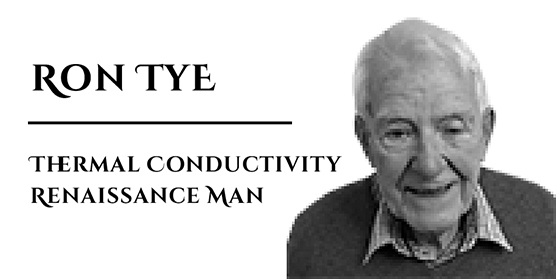 From my seventy plus years of experience in the subject I cannot say it is ever to gloss the picture. However, like art and literature there are individual occasions when a successful result or proving an action or technical finding can often excite equivalent feelings. This reminds me that in my formative years I did rather infantly publish a paper entitled The Art of Thermal Conductivity that tried to indicate facets of their similarity.

However, in the end I succumbed when was assured that there is an audience consisting of individuals who have experienced problems and require objective guidance in the field of thermal conductivity.

Why is thermal conductivity considered to be such an important fish?

As the meercat would respond “SIMPLE”

In any application where heat transfer is involved the objective is either to enhance or restrict the flow of thermal energy by utilising a high (metal) or low (cellular or fibrous material) thermal conductivity respectively. Practically, the concept, design, construction, and optimum economic performance of any system is dependent on the accuracy limits of the properties, especially that of the thermal conductivity of its components.

I believe that to understand a subject in detail, it is necessary to have some knowledge of its history and thus for me this somewhat nostalgic approach appeared to be a most suitable one to take. Perhaps, as a good start some introductory information on my experience to convince the reader that this nonagenarian does have a smidgen of knowledge on the subject is necessary. Essentially this consists of assessing and storing the results of activities during three approximately equal time periods of over twenty plus years spent first with government and subsequently two industry organisations followed by independent consultancy.

This career of seven decades of continuous involvement in thermal properties measurement began in the late forties when as a “raw” recruit I became member of staff of the National Physical Laboratory in the UK originally for nearly twenty years up to the mid-sixties. I then crossed ”the pond” to work in the USA for industry at Dynatech an R&D (later Holometrix Inc), Fiber Materials Inc. a manufacturer of all types of high temperature composites and then became an independent consultant for Sinku Riko (now Ulvac Riko) a Japanese company that specialises in all types of thermal properties, thermal analysis and radiation furnace systems.

Finally, in 1994, I returned home to the UK to continue as a private consultant principally at NPL but also in development of international and national standards. These sources and particularly the opportunities they have given me to meet with and become friends and colleagues of many international distinguished clients and workers, nay “experts”, from government, academia and industry enable me to offer unbiased, objective, information.

Fortuitously for me, although unaware of it at the time, this seventy-year era coincided with one that started in the early sixties and continued until settlement has been attained in the early years of this century. During this period thermal properties measurement has seen the most significant changes and rapid growth in history from the steadystate to transient approaches. The driving forces for this change can be summarised as follows:

1. the application, not the material, controlled choice of the measurement method,

2. improved understanding of the heat transmission mechanisms in different materials,

They were stimulated by the growth in the many new technologies that arose in the “recovery period” following the end of the war. These include for example, nuclear energy, space exploration, production and conservation of energy, electronics plus a multitude of various defence requirements all of which are applications where significant changes of temperature and/environment are relevant factors.

This has been accompanied by a dramatic increase in the development and use of new and improved materials combined with significant advances in related technologies including temperature measurement & control and improvements in the measurement precision of all associated instrumentation. The temperature range now extends from the cryogenic to very high and the environments from high vacuum to high pressures of gases other than air.

Measurement methods have increased in number and have changed significantly from the main use of “classical” standard steady-state techniques using “large” specimens to a range of differing contact and non-contact “transient” techniques where the specimen size and form is reduced to small relatively thin artefacts down to the sub-micron level for the specific form of thin films. In addition, there have been new techniques developed for measurements of the thermal diffusivity. Most recently, significant attention has been concentrated by commercial companies on the production of several fully automated version of some of the basic methods especially considered for quality control and assurance purposes.

My first experience was to “cut one’s teeth” by joining the NPL in the late nineteen forties and subsequently learn my trade through several related avenues to the present time. This has involved construction of apparatus, advice on and use of this and other apparatus, selection of commercial systems, participation in many international and national inter-laboratory, programmes especially related to standards, visit the major related organisations in many countries, know and become colleagues and friends of many experts, published a book, authored or co-authored some 200 published technical papers such that I can claim “been there done that”.

These early days involving slide rules, hand calculators, standard cells, galvanometers, potentiometers (resolution 1 microvolt, 0.1 later), manually operated fluid and electrical power control etc were devoted at that time to the use of steady-state methods for providing absolute values. These encompassed the longitudinal rod and radial flow methods for metals and other good conducting solids, and guarded plates of different size for insulations and low thermal conductivity materials including liquids. I was made aware of the availability of but did not use transient techniques such as the Angstrom periodic temperature long rod and the Fitch transitory temperature disc or slab. Data points were obtained at rates of 1 to 3 per day, at best, with improvement of hardware just a dream and software unknown until much later. In general, the NPL research programmes involved developing accurate property data for many pure metals for which there was NO in formation and the many newer alloys, ceramics cermets and graphitic materials that were in development use for the new applications as they arose. In addition, a measurement service was provided for any organisation requiring accurate property data and advice.

Personally, the sixties was a time of great change due specifically to opportunities presented as a result of the retirement in 1964 of Dr R.W. Powell the Section chief and my mentor and family friend, coupled with the resultant decision in 1965 by NPL management to close down the thermal properties section. To honour his career, the group decided to hold a conference with me as the chair to which “everyone”, including many prominent overseas workers, were invited. Expecting 60 or so attendees, we were gratified that over 40 including, 20 from the USA of the total 140 attendees were from foreign countries illustrating the level of respect this gentleman had attained during his 40-year NPL career.

Significantly at this time, the programme included two complete sessions on plus several miscellaneous papers devoted to “new” dynamic measurement methods of both thermal diffusivity and thermal conductivity, including its derivation from the diffusivity. There was one reference to a new “flash method” being developed in the USA using a flashlamp as the energy source being used in the USA. These indicated to all present the beginning of the prominence of transient techniques and their competition with steady-state methods.

However, as a result of the conference and the subsequent ceasing work at NPL two distinct events occurred. The first was being contracted by Academic Press to develop and edit a book based on the major topics of the conference and second more significantly the decision in early 1966 to work in the USA at Dynatech’s R&D Company a new offshoot company formed by Warren Rosenhow and other MIT professors. Specifically, this was to establish and operate a measurements laboratory service in support of the growing development of specialist and later a range of commercial measurement systems.

The blog stops at this point. The next two periods relating to the many activities undertaken while at Dynatech and Fiber Materials in the USA and subsequently on the consulting for NPL and others in the UK are too numerous to include in one piece. They will be included as detail in future editions where the intention is to discuss specific subjects, for example steady state methods; transient measurements; reference materials; definitions and nomenclature; standards. use and abuse.

In writing this piece I realised that I have been and seen a subject during three eras; the steadystate beginning, the transient the end and in between the renaissance. I can see something in common with art and literature since am a Renaissance Man.