George Frederick Charles Searle was born December 3rd, 1864 and was a British Physicist and Lecturer. Searle first began working at the University of Cambridge in 1888 at the age of 24 under the supervision of J. J. Thompson. He continued his work for another 55 years. Searle is best known for his contribution to the research on the velocity dependence of electrostatic mass which played an important role in the formulation of Einstein’s special theory of relativity. Along with these achievements, the Searle’s Bar experiment was produced, a simple and affordable way to calculate the thermal conductivity of good thermal conductors.

3.0 Materials, Experimental Set up and Procedure

*For how to make your own Steam Chamber, See Lee’s Disc Experiment* 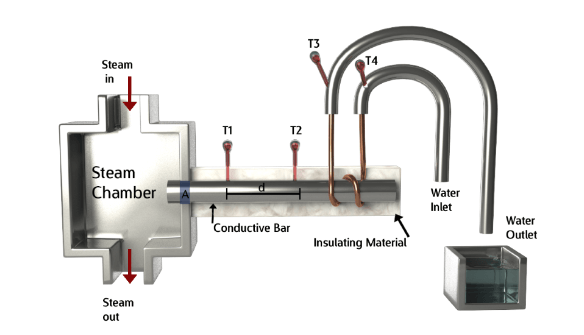 The thermal conductivity apparatus resulting setup should resemble the above figure.

The Rate of Heat transfer between thermometers 1 and 2 over a given distance d will be given by the formula:

This Formula can be rearranged to produce the following:

The amount of energy absorbed by the water is given by:

With this formula in mind, Q of equation (2) can be replaced by the equation (3) producing the following:

To make your own simulation:
https://thermtest.com/thermal-resources/energy2d-heat-transfer-simulations/

Thermtest is furnishing this item "as is". Thermtest does not provide any warranty of the item whatsoever, whether express, implied, or statutory, including, but not limited to, any warranty of merchantability or fitness for a particular purpose or any warranty that the contents of the item will be error-free. In no respect shall Thermtest incur any liability for any damages, including, but limited to, direct, indirect, special, or consequential damages arising out of, resulting from, or any way connected to the use of the item, whether or not based upon warranty, contract, tort, or otherwise; whether or not injury was sustained by persons or property or otherwise; and whether or not loss was sustained from, or arose out of, the results of, the item, or any services that may be provided by Thermtest.

Back to Build Your Own