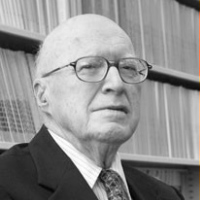 As a condensed matter physicist and emeritus professor of physics, Paul G. Klemens was one of the top researchers on the theory of phonons. Born in Vienna, Klemens and his family fled to Australia shortly before World War II broke out, where he learned to speak English and was awarded a scholarship to the University of Sydney, earning his BS degree and his MS degree in physics. Originally uninterested in theoretical physics, Klemens traveled to Oxford University in 1948, on the slowest boat from Australia, and was left with the only graduate topic nobody else wanted: thermal conductivity. After earning his Ph.D, Dr. Klemens returned to Australia and became principal research officer at the National Standards Laboratory where he worked and expanded on the theory of heat conduction in solids. In 1959, Klemens moved to the United States where he joined the Westinghouse Research Laboratories, heading a research group on thermo-electric energy, fuel cells, and the “Star Wars” missile defense technology. Paul was the first recipient of the Phonons Award in 1986, recognizing his longstanding contributions to phonon physics, and in 2001, the award was renamed the Klemens Award in his honor. With many patents, and years of contributing theoretical insight and research to the scientific community, Paul G. Klemens is regarded as a pioneer of modern thermal conductivity.

With a large reputation and years of experience under his belt, Klemens has played a key role in the development of the “Star Wars” missile defense technology and was the first recipient of the Phonons Award in 1986.