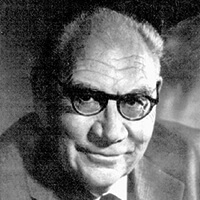 John Conrad Jaeger, an Australian Scientist, graduated from the University of Sydney in 1928, with first class honors, from the Bachelor of Science program. During his degree, Jaeger made the transition from the Faculty of Engineering to the Faculty of Science; most say due to the strong influence of Horatio S. Carslaw. Jaeger then continued onto Cambridge University where he earned his Mathematical Tripos in 1930, and spent most of his time researching quantum mechanics. After schooling, Jaeger enjoyed a multifaceted career as a professor, administrator, and researcher. Jaeger’s areas of study were primarily applied mathematics, earth sciences, and engineering, focusing on the heat conduction of solids in his later years. As an author of many books, Jaeger collaborated with Horatio S. Carslaw on two: Conduction of heat in solids and Operational methods in applied mathematics. After the passing of Carslaw, Jaeger continued his research efforts on the theory of heat conduction, to further improve the Carslaw method. For his tremendous contributions in mathematics and heat conduction, Jaeger is regarded as one of the grandfathers of thermal conductivity.