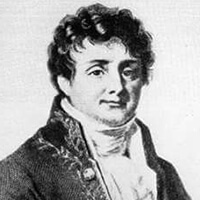 In the early 1800’s, Jean-Baptiste Joseph Fourier, was a French mathematician and physicist. At a young age, Fourier’s immediate family passed away, leaving him orphaned. Fourier was subsequently placed in a military education system, where he excelled at physics and mathematics. In 1798, Fourier was sent on Napoleon’s Expedition, and had an active role in the French Revolution. During his time with Napoleon, Fourier performed administrative and secretarial duties at the Institute of Egypt, and was heavily involved with political and diplomatic assignments. Alongside of his political roles, Fourier worked tirelessly at nights producing his theory of heat conduction. In 1811, Fourier won the Prize in Mathematics for this theory, however it was not published because of doubt surrounding his equations. Wanting to focus more on his scientific discoveries, Fourier moved to France, where he was elected to the Académie des Sciences in 1817, and the Académie Française in 1826. With the completion of his Theory of Heat Conduction, and his series of equations relating to heat transfer, his work was finally published under the title The Analytic Theory of Heat, in 1822. Without Fourier’s contributions in mathematics and physics, scientists of today would not be where they are. Most notably, Fourier’s theory of heat flux, led to the discovery of global warming. As such, Fourier is regarded as one of the grandfathers of thermal conductivity.