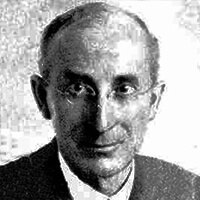 Horatio. S. Carslaw, a Scottish-Australian mathematician, graduated from the University of Glasgow with an M. A. in 1892. Carslaw also attended Emmanuel College where he graduated with a B.A. in 1894, an M.A. in 1898 and a Sc.D. in 1908. By 1903, Carslaw was appointed to the Chair of Pure and Applied Math at the University of Sydney and remained as chair until his retirement in 1935. Come 1926, Carslaw was awarded an honorary doctorate from the University of Adelaide in Science, followed by an honorary doctorate in Law, in 1928, from the University of Glasgow. As a mathematics professor, Carslaw was heavily involved in student life and had a strong influence on them in many ways. As lead writer and theory developer of the books: Conduction of heat in solids and Operational methods in applied mathematics, Carslaw contributed a “pure” sense to the pieces of work, while his partner, and previous student, John Conrad Jaeger contributed more of an “applied” sense. For most of his career, Carslaw expanded on Fourier’s theory of heat conduction, and has since been considered one of the grandfathers of thermal conductivity.