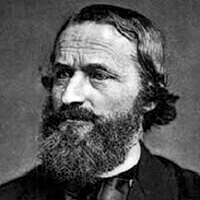 German physicist, Gustav R. Kirchhoff graduated from the University of Königsberg, Germany, in 1847, with a degree in mathematical physics. He then earned his teaching rights from the University of Breslau in 1848, where he began lecturing. While still a student, Kirchhoff, with the help of Wilhelm Weber, also a German physicist, challenged Ohm’s theory of electrical current (1828), with their own theory, in 1857. An accidental discovery of the relationship between emissive and absorptive power occurred, allowing Kirchhoff to coin the term “black body” emissions, which led to the discovery of his second law of thermodynamics and the theory of radiation. It was Kirchhoff who proposed the equation that stated the difference in heat capacity between products and reactants, accounts for the variation of heat in a chemical reaction. In 1860, Kirchhoff helped lead Robert Bunsen to the discovery of two novel chemical elements; cesium and rubidium, thanks to his extraordinary knowledge of spectral analysis. Kirchhoff was the first ever recipient of the Davy Medal in 1877, for his contributions in spectrum analysis. Later that year, he was also presented with the Matteucci Medal. In 1887, mere months after his death, Kirchhoff was also the first to be awarded the Janssen Medal, similarly for his work in spectroscopy. With the contribution of such a vital heat capacity equation, it is no wonder he is considered a founding grandfather of thermal conductivity.