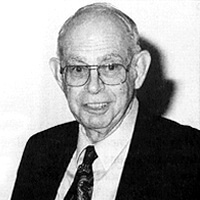 Dr. William J. Parker started his thermophysical career in 1954 when he completed his MS degree in Physics at the University of Oregon. He was employed by the US Naval Radiological Defense Laboratory (NRDL) for 16 years and was involved in the nuclear testing of the 1950’s. In 1959, he became the section leader for the High Temperature Physics Section, which was when he and his colleagues began developing the Laser Flash Method to measure thermal diffusivity and specific heat or heat capacity. For those involved in the profession of thermal conductivity, William J. Parker was a household name in the early 1960’s. The Laser Flash Method was finalized in 1964 when the NRDL hosted the Fourth Conference on Thermal Conductivity, and a new era of thermal measurements was born. Dr. Parker became the head of the Fire Research Section in 1966, and in 1969 he accepted a position at the Fire Research Section at the National Bureau of Standards, where he remained until his retirement in 1990. Before his retirement, he attended George Washington University and received his PhD in Mechanical Engineering in 1987. Dr. William J. Parker received the highly acclaimed Thermal Conductivity Award for his dedicated work on the Laser Flash Method, which remains the most popular method of measuring the thermal diffusivity of solids. The paper he published in 1959 that unveiled the Flash Method incredibly has more than 1000 citations. Dr. Parker is undoubtedly considered a founding father of modern thermal conductivity, as his name is the first to appear on almost every paper relating to thermal diffusivity.