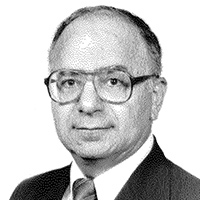 As the founding editor of the International Journal of Thermophysics, Dr. Ared Cezairliyan is an internationally acclaimed physicist in the field of high-temperature thermophysics. Born in Turkey, Cezairliyan established an early reputation as an outstanding student and attended Robert College in Istanbul, receiving a B.S. degree in mechanical engineering and demonstrating a keen interest in arts and philosophy. After moving to the United States, Cezairliyan studied at Purdue University, where he earned his M.S. degree and Ph.D. under the guidance of Yeram S. Touloukian. Following graduation, Ared joined the National Bureau of Standards as a research physicist, where he pioneered work in the field of measurements of thermodynamic and transport properties of metals and alloys at high temperatures. As the founder of the world-renowned Dynamic Thermophysical Measurements Laboratory, he has generated highly accurate data on the thermal properties of refractory materials at high temperature. Having more than 140 scientific publications to his name, Dr. Cezairliyan has received many national and international awards for his pioneering and extensive contributions to the field of thermophysics, including the Yeram S. Touloukian Award, named in honor of his beloved mentor.

Dr. Ared Cezairliyan is an internationally acclaimed physicist in the field of high-temperature Thermophysics. As the founder of the world-renowned Dynamic Thermophysical Measurements Laboratory, he has helped generate accurate data on refractory materials at high-temperatures.

Most Cited Works by Ared Cezairliyan:

Selection of Work by Ared Cezairliyan: