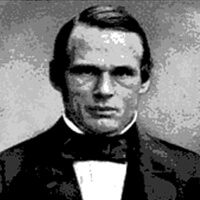 Anders J. Ångström was a Swedish physicist, most notably recognized as one of the founders of spectroscopy. One may also recognize his name as the unit used to measure the wavelength of light (Å). Ångström received a doctorate degree from Uppsala University in 1839, where he would later become a private docent (1842), as well as the chairman of the physics department (1858). While at Uppsala, Ångström pioneered a new method to determine thermal conductivity of materials; deeming it proportional to electrical conductivity. This new method entailed applying an alternating heat pulse to one end of a metal rod, and noting the temperature difference on each end of the rod, as a factor of time. Years later, Ångström mapped the solar spectrum in units of 10-10 meter, to which the Ångström was named after. In 1867, Ångström became the first person to examine the spectrum of the northern lights, where he measured the characteristics of the yellow-green region. Ångström was awarded the Rumford medal from the Royal Society in 1872, for his work with spectrum analysis. More specifically, Ångström, deduced the theory that states a spark emits, not one, but two superposed spectra; one from the metal and the other from the gas.