Lithium-ion batteries have revolutionized powering electronic devices, they have much higher energy densities and can undergo more charge/discharge cycles than older battery models. However, as energy density has increased, so has the need for effective thermal management. Lithium-ion batteries produce a lot of heat, which must be dealt with properly in order to prevent catastrophic failure or loss of quality. Current features to help with heat dispersion add weight and complexity to the battery system. Koo et al. (2014) from the Argonne National Laboratory performed research to improve the thermal conductivity of the electrode itself through the incorporation of multi-walled carbon nanotubes (MW-CNTs). The thermal conductivity of electrodes in lithium-ion batteries is currently quite low due to the low thermal conductivity of carbon black, one of the main materials used in their production. 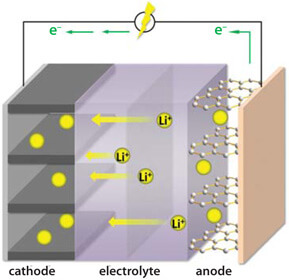 Figure 1. Schematic showing the basic set up and operation of a lithium-ion battery.1

Koo et al. (2014) created several samples of materials with a combination of MW-CNTs and cathode materials to test whether CNTs could help increase the efficiency of thermal management in lithium-ion batteries. These samples were layered CNTs and cathode materials produced through a filtration method, which the authors reported was scalable and inexpensive. Both electrochemical performance and thermal conductivity of the samples were measured in order to determine which sample design was the most applicable to the research objective.

Thermal conductivity was measured using two different methods, the laser flash technique, and the Hot Disk Transient Plane Source technique. Both cross-plane and in-plane thermal conductivity were measured; the laser flash was used for cross-plane, and the Hot Disk TPS 2500S was used for in-plane (Figure 2). The anisotropic module available with the Hot Disk TPS system enables it to make accurate measurements of anisotropic materials that are difficult to quantify with other techniques. When performing anisotropic measurements with the Hot Disk TPS, is it important place the sensor so that it is perpendicular to the normal axis and parallel with the planar axis (Figure 3). A variety of sensor sizes are available, and researchers can select the one that best fits their needs. It is important that the power output and length of the test are set so that the heat produced by the sensor does not reach the boundaries of the sample.

Figure 2. Diagram showcasing the two different directions of heat conduction measured by Koo et al. (2014). In-plane thermal conduction in seen on the left, while cross-plane is seen on the right. The anisotropic module of the Hot Disk TPS system can measure both simultaneously. 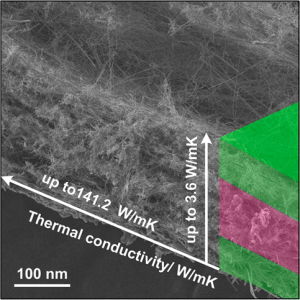 Koo et al. (2014) concluded that the filtration method of incorporating MW-CNTs into lithium-ion battery electrodes had produced an improved design with a much better thermal conductivity than conventional production methods. This project and similar work has the potential to increase the thermal management in lithium-ion batteries that will result in a better, safer product.

Note: For comprehensive results and discussion, please follow the link to this scientific paper in the reference section.