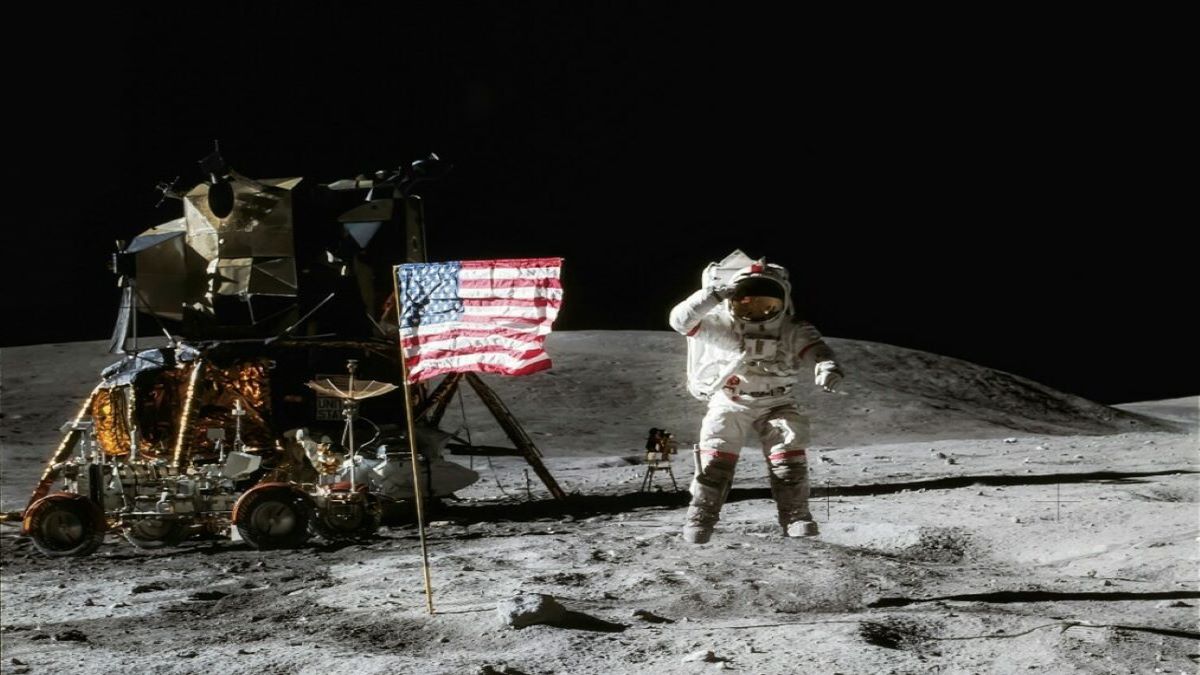 Thermal Conductivity in the 1960’s – Blasting Off to New Heights

Advances in Thermal Conductivity in the 1960s and its importance for the success of the Apollo 11 mission.

The 1960s was a time in American history that experienced a tremendous boom in technological advances. The role thermal conductivity plays in determining a material’s industrial application finally became evident, leading to it becoming a key component considered in the manufacturing and design of many technical products. The defining moment in history that made thermal conductivity and other thermal processes a significant consideration in equipment design was the construction and launch of the Orbiter spacecraft that carried the first humans to the moon.

On July 19th, 1969, American astronauts Neil Armstrong and Edwin “Buzz” Aldrin became the first humans to ever walk on the moon. The American effort to send a man to the moon was kickstarted by a promise made by President John F. Kennedy on May 25th, 1961. Kennedy declared that the United States would dedicate themselves to sending a man to the moon and have him return to earth before the end of the decade. Just over 8 years later, his promise was upheld when Neil Armstrong took “one small step for man, one giant leap for mankind.” This moment in American history was still plagued by an arm’s race with Russia as an aftermath of the Cold War. This competitive mindset between two of the most powerful nations in the world fueled the goal for Americans of being the first country to place a flag on the surface of the moon. This geopolitical urgency lit the fire that started the Apollo missions and after a significant amount of time, effort, and money, it eventually leads to the success of the Apollo 11 mission which is now known so famously in global history. 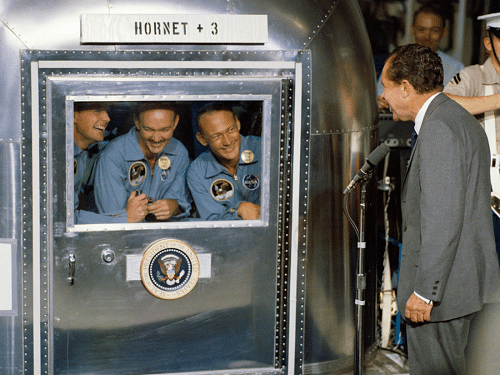 Most of the cutting-edge technology required for the success of the Apollo 11 mission far exceeded the current manufacturing ability of most American factories at the time. Knowledge regarding a material’s thermal property and how it may impact its functioning were still being researched by many of the world’s most brilliant engineers and scientists. This goal set out by the president, to send a man to the moon, pushed many researchers to dive deeper into discovering the role of properties, such as thermal conductivity and its play in the success of a highly refined piece of equipment.

Ronald Tye is just one example of a highly intelligent individual who has extensive knowledge in the area of thermal transfer that joined in on the effort to develop innovative thermal technology. Over his career of seven decades, Tye experienced the continuous development of obtaining accurate thermal properties measurements as well as the application of heat transmission mechanisms in a variety of materials. Throughout his lifetime, Ronald Tye made many significant contributions to the scientific community that undoubtedly contributed to the success of many missions such as Apollo 11. His lifetime dedication to unearthing the full potential of materials’ thermal properties is why he is now deemed one of the founding fathers of modern thermal conductivity.

Contributions made to the thermal industry by highly regarded scientists such as Ronald Tye paved the way for the refinement and development of the equipment used for the Apollo 11 mission. The design of the space shuttle, the Orbiter, used for the Apollo 11 mission presented many thermal challenges for engineers at NASA, specifically regarding thermal insulation. The system selected not only had to perform well at excessively high temperatures, but it also had to integrate itself within other sub-systems. In order for the structures on the spacecraft to maintain their structural integrity when exposed to these high temperatures, they had to be lightweight, reusable, low cost, and provide adequate thermal insulation. The shuttle also required low vulnerability to orbital debris and must possess a low thermal conductivity. The external tank on the space shuttle also demanded sufficient thermal insulation and high thermal resistance to ensure the protection of the cryogenic fuels, liquid hydrogen, and liquid oxygen. The materials used for the construction of the shuttle had to assist in maintaining sufficient structural integrity throughout the entire journey to the moon and back.

Making it to the moon

The first moon landing was 8 years in the making, took 10 practice runs, and the brainpower of more than 400,000 engineers, scientists, and technicians. A module with an interior no larger than the inside of an SUV would serve as the living quarters for the three astronauts during their mission titled Apollo 11. This module sat atop an 11-meter-tall Saturn V Rocket, the most powerful rocket to ever fly at the time.

This extraordinary expedition marked the first time in history when some of the most recently developed thermal technology was finally put to the test. Most of this technology was used during the construction of the heat shield used to protect the astronauts as they re-entered the earth’s atmosphere on their return trip home. The capsule reached speeds up to 25,000 Mph and the friction generated during their return was measured at temperatures over 5000 degrees Fahrenheit. Just to give an idea of the extreme environment this shuttle pass through, temperatures this high are enough to completely vaporize most metals. To tackle this problem a Massachusetts company known at the time as Avco, constructed a new resin-like material that would shield the capsule from heat as its own surface would gradually begin to burn away to help dissipate the heat experienced during re-entry. This resin material was incorporated into a honeycomb framework that surrounded the capsule. This framework was designed to hold and effectively distributed the heat shielding material. The thickness of the honeycomb’s framework varied greatly depending on the region it was applied to in order to provide the necessary heat protection required at that specific point. The honeycomb structure contained 370,000 individual cells that were filled with the resin by hand using slightly modified caulking guns. This required an extremely delicate technique that “gunners” had to be trained on for two weeks before they were even allowed to come near the actual space capsule. Most of the framework was made from aluminum layers bonded between aluminum alloy sheets. The thermal properties and overall performance of this capsule are arguably one of the most important parts of the entire Apollo mission as it was this capsule that housed the three astronauts for the duration of their journey. 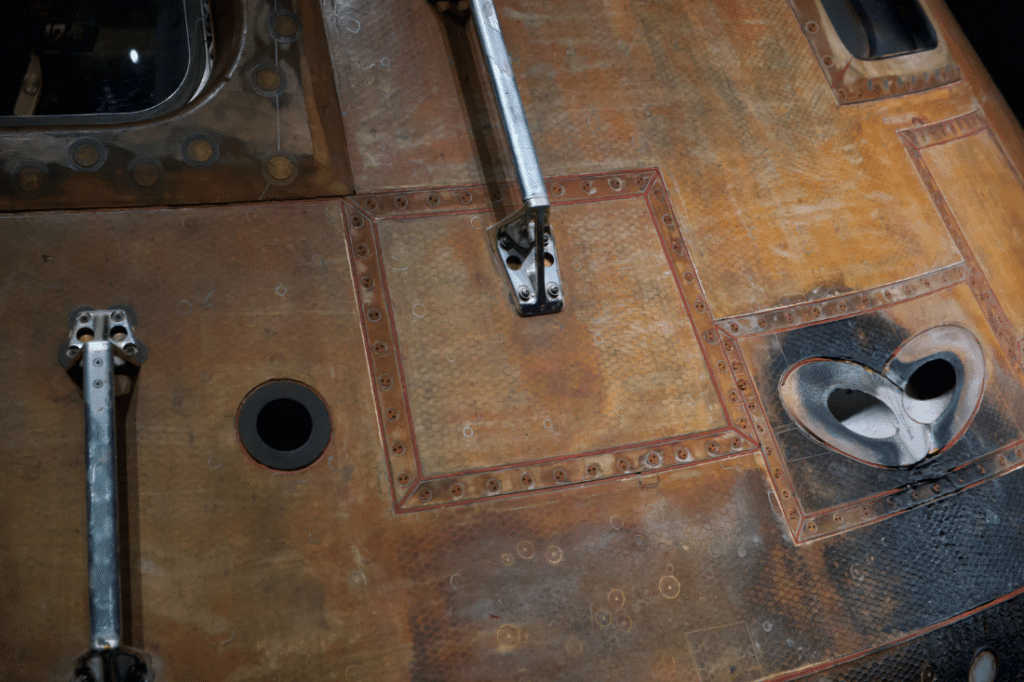 Figure 3: Honeycomb detail on the command module for the Apollo 11 mission.

The Apollo 11 mission marked the first time humans made a return trip from space after physically leaving the spacecraft. This meant the thermal protection for the shuttle had to be reusable so that the shuttle would be able to re-enter earth’s atmosphere on its way back from space. Previous trips to space were only one-way and did not require the advanced technology that would be needed for a landing and then take off from space. To meet this new challenge, engineers at NASA developed a rigid silica/alumina fibrous material that could withstand the thermal demands that would be imposed on the windward surface of the orbiter. However, this innovative material lacked the thermal requirements necessary for the nose and the wings of the shuttle that are exposed to an even more severe thermal environment than the main body of the shuttle. 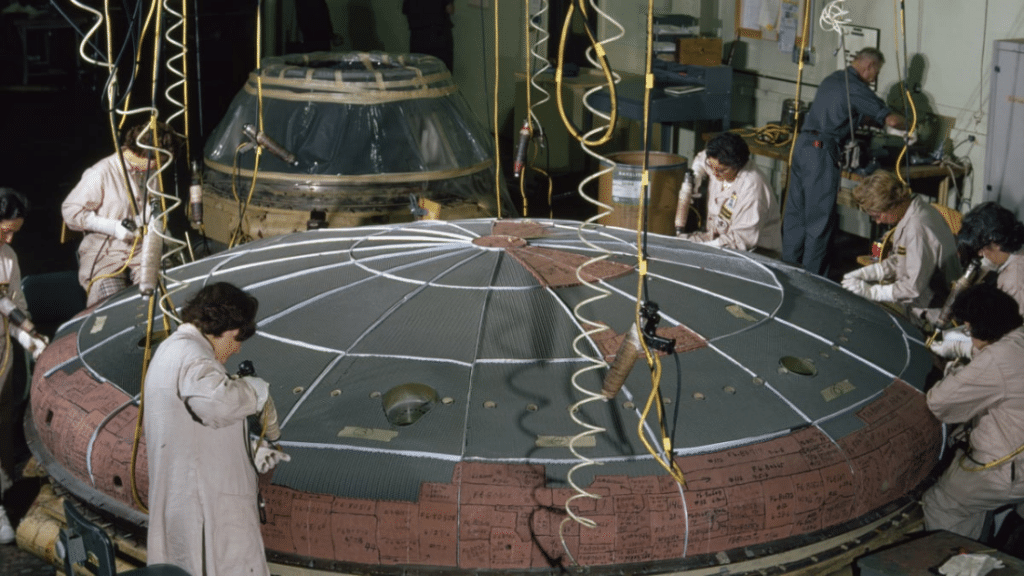 Thermal protection for the wings and nose

The wings and the nose of the orbiter took on the majority of the heat for the entirety of the Apollo 11 mission. During the construction of these key aspects of the Orbiter, a carbon-carbon composite material was selected. This composite material incorporated a coating with an extremely high thermal effusivity that would assist in spreading and dissipating excess heat. This unique carbon material was developed by the Vought Cooperation in collaboration with NASA. Reinforced carbon-carbon is made by curing graphite fabric that has been filled with a phenolic resin laid up in complex molds which formed the contours on the nose and wings leading edge of the orbiter. Carbon will oxidize at high temperatures, so it required a silicon carbide coating to protect the carbon substrate. If any oxidation were to occur it could severely impact the strength and structural integrity of the material, so designers and builders had to ensure that this process was minimized as much as possible. The functionality of reinforced carbon-carbon can be attributed to its ability to reject heat by external radiation. This means it is highly effective at transferring heat from the system into the surroundings. Reinforced carbon also has an excellent surface emissivity and can reject heat by radiating it into space. Although carbon-carbon materials are designed with the intentions of insulating an object, carbon itself has a relatively high thermal conductivity meaning it is efficient at passing heat through it. Additional materials had to be incorporated in the construction of these aspects of the Orbiter to compensate for the undesirably high thermal conductivity of carbon.

Another aspect that was of paramount importance during the Apollo 11 mission that gets frequently overlooked is the thermal design behind the spacesuits worn by the three astronauts that landed on the moon. These spacesuits consisted of 12 layers of nested fabric that were incredibly strong, durable, and flexible. These suits were made by Playtex, the same company that provided Americans with the “cross your heart” bra in the 1960s. Some of the materials used for the fabric of the suits were adapted directly from the materials used by Playtex in their bras and girdles. Assembling the space suits was a remarkably grueling task that had to be accomplished entirely by hand. Women were brought over from the industrial division of Playtex arose to this challenge and constructed these spacesuits that protected the astronauts in the unforgiving environment surrounding the moon. This division of Playtex is now an independent company called ILC Dover and fifty years later they are still making all of NASA’s spacesuits. 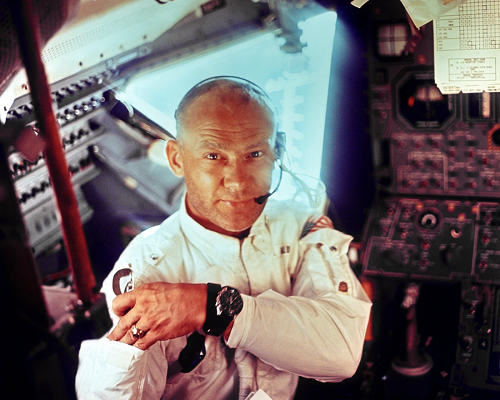 Without an advanced understanding of thermal conductivity, few of these key components characterizing the Apollo missions would have been able to be designed as effectively and efficiently as they were. Contributions by thousands of notable scientists in this area, including experts on the subject of thermal conductivity like Ronald Tye, made a mission as extravagant and monumental as a man walking on the moon possible. From the innovative materials developed for the body of the Orbiter shuttle to the type of stitches needed for the spacesuits, every aspect of this mission was crucial to its overall success, and without thermal conductivity, it is questionable that the Apollo 11 mission would have even been possible. It was advances such as this in the area and application of thermal conductivity that paved the way to a better understanding of the role that a material’s thermal properties play in the design of intricate technological equipment. Much of the thermal knowledge gained throughout this decade is still extremely relevant today and used by many to harness the full potential of a piece of equipment.