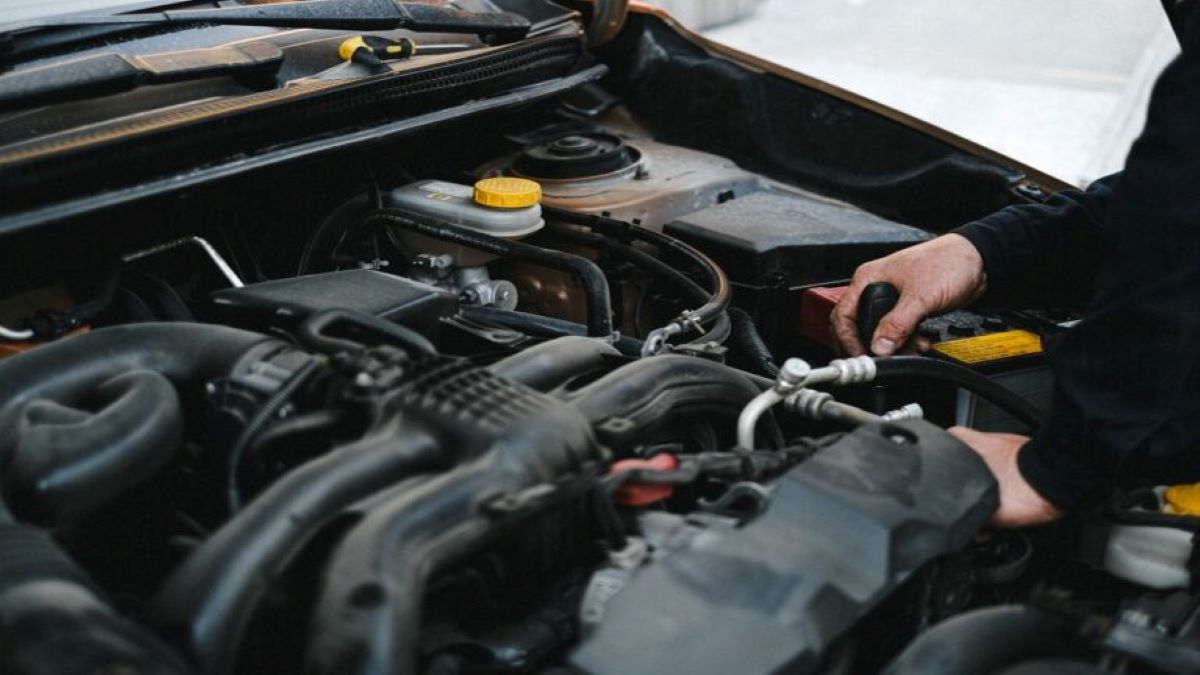 The quality of a vehicle’s engine oil plays a crucial role in determining the efficiency of a car motor as well as impacting its durability and performance. Most engine oil is used in internal combustion engines for lubrication and cooling purposes, hence why its thermal properties play a significant role in determining the quality of an oil. The main function of oil is to prevent corrosion, help cleaning, enhance seal, reduce wear and tear as well as cool other moving engine parts. Many engine oils have a sufficient thermal conductivity for transferring heat expelled from a car engine. Unused oils at a temperature of 60°C exhibit a thermal conductivity of 0.145W/(m/K). Thermal conductivity is just one of many thermal properties that allow engine oil to perform its duties as an effective engine coolant.

The thermal properties of a material refer to its response to a change in temperature after it encounters a large increase in the temperature of the surrounding environment. A solid material will generally absorb energy in the form of heat and its temperature rises and dimensions will increase. Different materials will respond to the application of heat in a variety of ways. Some key thermal properties of a material that are taken into account when considering its potential uses in high temperature environments include heat capacity, thermal expansion, thermal conductivity and thermal resistance. 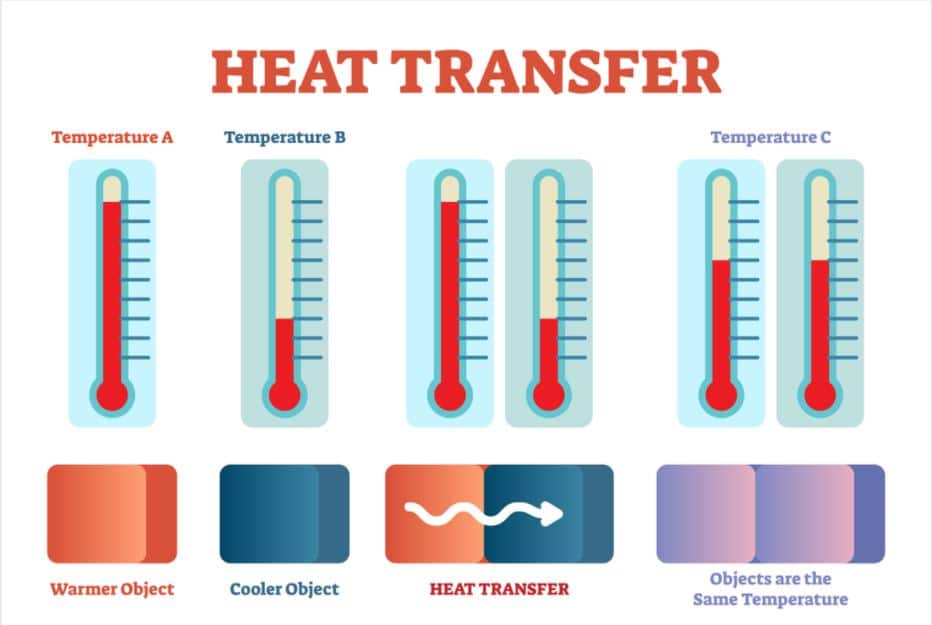 Figure 1: Diagram depicting the transfer of heat from a warmer object to a cooler one until equilibrium is achieved.

Other Key Properties of Engine Oil

Aside from thermal conductivity, the density, viscosity and specific heat capacity of engine oils can have a major impact on its effectiveness as an engine coolant. The heat capacity of a material reflects how much energy per gram of substance is required to trigger a 1°C increase in temperature. This property explains why oil can heat up significantly faster than water because the heat capacity of oil is lower than that of water meaning less energy is required to initiate a change in temperature. Oils with a larger specific heat value will require a smaller increase in temperature to trigger a larger degree of heat absorption. A substantial amount of research is underway in an attempt to increase the heat capacity of engine oils to make them more efficient and have a longer life span. Increasing an oils operating life would mean fewer oil changes and checkups and save vehicle owners a lot of time and money. 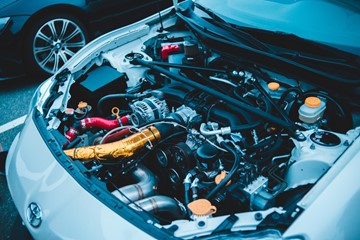 The density of engine oil is a function of the engines optimal operating temperature with the density decreasing as the temperature generated from the engine increases. Engine oil colour can be an excellent indicator of oil deterioration due to the oil undergoing a burning experience caused by the massive amounts of heat expelled from the engine during internal combustion. The heat released from an engine during this process can have major impacts on other characteristic of oil such as viscosity and density.

Thermal conductivity and viscosity are two of the most important characteristics of engine oil as they have a significant impact on overall performance of a motor. Thermal conductivity describes a material’s ability to transfer heat.  Materials with a high thermal conductivity, such as copper or silver, can facilitate rapid heat transfer whereas insulative materials, such as foam or cotton, are slow to take up and transfer heat from their environment. Engine oil will absorb heat from contact surfaces and transport it to another location such as an oil stump where is can be safely dispersed. Most oils are engineered to help cool a number of engine parts including piston assembly, heads and valves. Generally, most formulated oils consist of either a mineral, semi or fully synthetic base material combined with a varying number of additives. The quality of an engine oil depends on the base stock as well as the properties of the additives. Engine oil is available at a range of SAE grades designed to best suit the climate where it is being used. The relationship between thermal conductivity and efficiency of the engine is strongly correlated as engine oils with a higher thermal conductivity value will have greater efficiency and minimize friction loss. 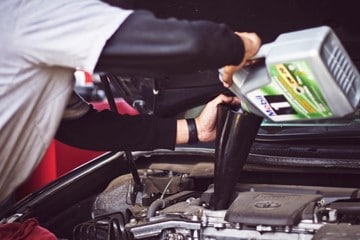 Figure 3: Addition of oil to a car engine.

Oil as an Engine Lubricant

Increased friction within an engine can have a serious impact on the overall functioning and health of a motor and without an effective engine oil, most vehicles would quickly overheat and experience significant damage. Oil is an extremely effective lubricant that provides a fluid barrier between moving engine parts to prevent friction and wear. This lubrication process is accomplished by oil leaving a thin film on the surface of moving parts allowing them to glide smoothly during operation. The ability of an oil to remain “stuck” and continue coating equipment after an extended period of time is a major preventor of wear on the engine during a cold start. A cold start refers to attempting to start an engine either in extremely cold temperatures or after it has been resting for long periods of time. Numerous studies have indicated that this is when the most damage will normally occur to an engine.

Thermal properties are often used to characterize the effectiveness of an engine oil, however, there are some other minor components that can also play a role in helping a vehicle motor run smoothly. One of these secondary properties is the ability of oil to minimize internal component corrosion within an engine. Although motor oil has no natural ability to resist corrosion, through the use of additives it is able to form a barrier between key engine components and the corrosive material. Oil can also act as a dynamic seal in locations like the piston ring/cylinder interface. A dynamic seal will assist in keeping combustion gasses in the combustion chamber which will maximize a vehicle’s horsepower and help prevent hot gases from escaping and contaminating the engine oil in the sump. A highly functional oil can effectively cushion the blow of mechanical shock by absorbing and dispersing energy spikes over a broad area of contact. A reduction in mechanical shock will extend the motors overall operating lifespan.

Although oil exhibits a very dirty appearance itself, it is extremely important for maintaining the overall cleanliness of an engine. One key property that promotes this self-cleaning aspect of oil is its solvency. Solvency is the ability of a fluid to dissolve a solid, liquid or gas and can also be altered due to the presence of additives such as detergents or dispersants. Detergents are additives that prevent contaminants from adhering to engine components specifically hot components such as pistons or piston rings. Dispersants help keep contaminants suspended in the fluid and act as a solvent by assisting the oil to maintain cleanliness and prevent sludge formation.

Engine oil is composed of a mixture of base oils combined with a variety of additives. These materials work in tandem to produce the final product that you put into your engine to help it function properly. Base oils contribute the most to the overall volume of the substance and can be made of petroleum, chemically synthesized materials or a combination of both petroleum and synthetic material which is known as a semi synthetic or synthetic blend.

Petroleum is refined from crude oil and contains elements such as sulfur, nitrogen, oxygen and other metal components including nickel and vanadium as they cannot be completely removed during the initial refining process. This refining process aims to distinguish various types of molecules present in oil by weight leaving molecules that are similar in size but dissimilar in structure. 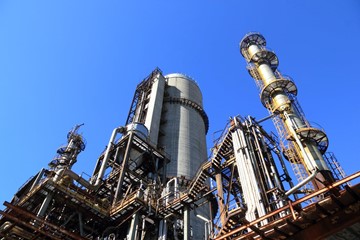 Synthetic engine oil is highly refined and engineered to incorporate only the most desirable and beneficially molecules as it contains very few components that don’t serve a specific purpose. It is an extremely versatile and pure substance that has a very specific molecular structure aimed to provide better friction reduction, optimize fuel efficiency, maximum film strength and a high-level performance in extreme temperatures. Additives are another component of engine fuel that help optimize its efficiency and ensure it is carrying out tasks to the best of its ability. A few examples of chemical additives include zinc, phosphorous and boron. Finding the perfect additives to base oil ratio is a tricky balancing act for oil formulators, especially as vehicle engine technology becomes increasingly more specialized and sophisticated.

Engine oil is a very impressive material that exhibits some unique thermal properties as well as some desirable chemical properties that promote its use in specialized engine equipment. Because engine oil is incompressible it makes an excellent heat and energy transfer medium which prevents an engine from overheating and causing damage to the vehicle. Modern engine oils have numerous functions and jobs they must excel at in order meet the ever-growing consumer demands. The composition of these oils is becoming increasingly specialized as todays engines continue to be designed to be smaller, produce more horsepower and maximize fuel efficiency all while reducing emissions. These goals increase the workload on engine oils and the demand on production companies as they continue to research and test the effectiveness of new base-oil to additive ratios attempting to find the right balance. The correct balance of additives will support a motor by protecting every engine component and make it last longer.

Trey. (2019, June 03). What is motor oil? A Beginner’s Guide to Motor oil. What you need to know. Retrieved November 10, 2020, from https://synthetic-oildepot.com/a-beginners-guide-to-motor-oil-what-you-need-to-know/

Figure 1: Diagram depicting the transfer of heat from a warmer object to a cooler one until equilibrium is achieved. Photo by VectorMine from Shutterstock. Retrieved from https://www.shutterstock.com/image-vector/heat-transfer-physics-poster-vector-illustration-1091469068