November 2030 is the deadline set by the United Nations to meet 17 clearly defined sustainability goals. The onus is now on us as occupants of this planet to design and implement the necessary infrastructure to meet these goals before human caused climate change continues to wreak havoc on our earth in irreversible ways.

A number of these sustainability goals emphasize shifting our reliance on polluting forms of energy capture and manufacturing to clean and renewable sources. With only 8 years remaining on the rapidly ticking climate change clock, the pressure is on governments and authority figures to strategize solutions to replace greenhouse gas emitting systems with more environmentally friendly technology and infrastructure. What is Geothermal Energy?

This race for replacement has driven the demand for renewable energy systems to sky high. Most of these systems, once installed, can lead to massive reductions in harmful greenhouse gas emissions and contribute to huge economic and energy savings. One specific area of green energy that is emerging into the spotlight is the geothermal energy sector. These systems take advantage of the stored energy beneath the earth’s surface by redirecting it to power a wide range of heating and cooling processes. This energy is harnessed through both small- and large-scale developments ranging from massive power plants that can provide enough energy to fuel entire cities, to in-ground heat pumps that can regulate the temperature of an individual home.

Geothermal energy is derived from the earth’s core through the natural conduction and convection processes that occur between the center of our planet and its exterior surface. Temperatures within the earth’s core can reach as high as 4000°C which causes the surrounding rock to melt and transform into molten rock, or magma. The piping hot magma will transfer heat upwards and into the mantle that is located above the core causing it to behave more like plastic than a hard rock. As portions of the mantle start to ebb and flow due to losing their rigidity, they convect heat upwards towards the surface of the earth. This upwards movement of heat and energy is what we tap into when we extract geothermal energy. 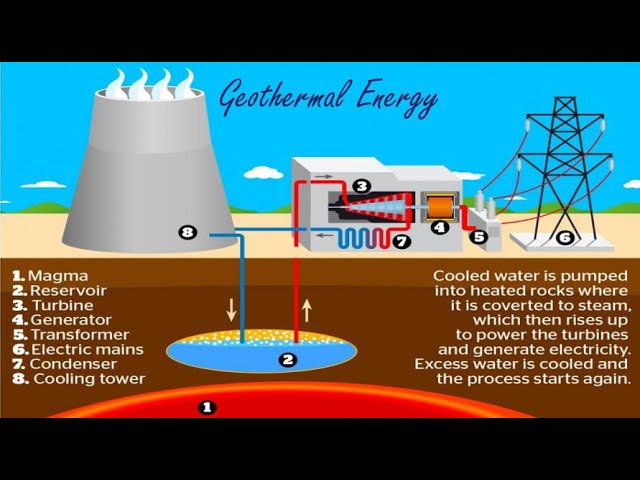 Figure 2: A graphic representation of the harnessing of earth’s interior energy

A brief history of geothermal energy

This form of energy was initially collected as steam released from cracks in the earth’s crust. Although innovative, steam has severely limited applications and was restricted to powering simple turbines. Since then, the scope of uses for geothermal energy has expanded and modernized as it is now commonly used for heating and cooling the inside of buildings and homes. The largest producer of geothermal energy currently is the USA but other countries such as Iceland can exploit significant amounts of thermal resources thanks to their unique geographic placement near earth’s tectonic plate boundaries. Iceland has been tapping into geothermal energy for over a century and is the premier example of a region set up for success due to its landscape containing 25 active volcanoes, 600 hot springs, and over 5 massive geothermal energy plants. This Northern country currently collects an impressive 25% of its total energy from geothermal sources.

There are many substantial environmental benefits associated with swapping conventional fossil fuel energy for geothermal energy. For example, geothermal energy emits 1/5th of the amount of CO2 emitted by a clean natural gas power plant and is cheaper than conventional forms saving users up to 80% compared to fossil fuels. Unlike solar and wind energy, geothermal energy doesn’t rely on uncontrollable variables such as the weather or the wind. It is a consistently available resource just waiting to be tapped into. Despite its many perks, there are several shortcomings associated with geothermal energy including the initial cost of construction, drilling, and exploration. When designing a geothermal energy system of any size, it is extremely important to consider the thermal properties and structure of the surrounding geological material to ensure the most economical and efficient system is being built. The following three subsurface characteristics can make or break the design of a geothermal heat exchanger system. The thermal properties include heat capacity, undisturbed surface temperature, and thermal conductivity. 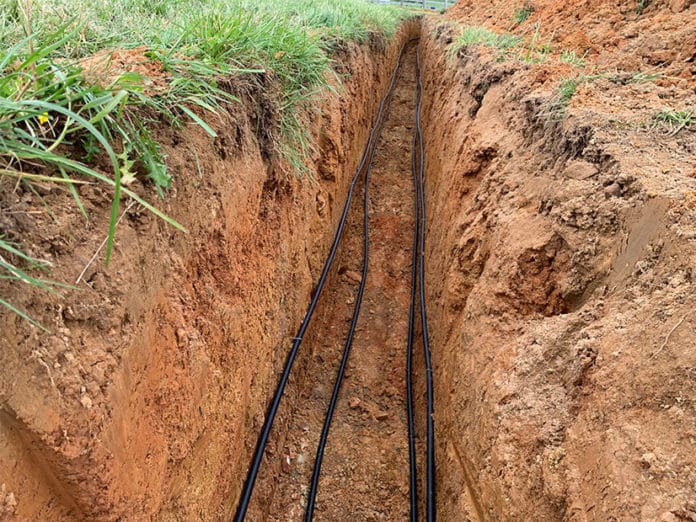 In Canada and similar Northern latitudes, the most efficient systems for heat and cooling residential homes are geothermal heat exchangers (GHEs) with Canadian markets showing a strong preference for closed loop GHE systems. Much of this preference is due to this variety being easy to maintain and having relatively straightforward regulations associated with their safe operation. This type of heat exchanger is commonly referred to as a ground coupled heat exchanger (GCHE) and can be installed in either a vertical or horizontal orientation. GCHEs are generally made of high-density polyethylene pipes that are buried in boreholes or trenches of varying depths. A heat carrying fluid made of water and antifreeze circulates these subsurface pipes allowing heat to be exchanged with the fluid and the ground above it. Besides GHCE configuration, heat pump efficiency is largely determined by the building’s energy demands and the heat transferring ability of the subsurface materials. This is where thermal conductivity comes into play as it is one of the most influential metrics for quantifying this heat transferring ability. 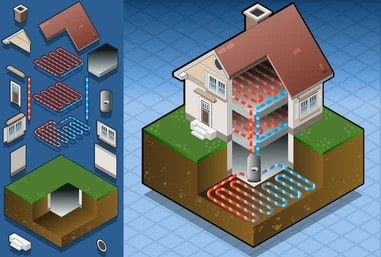 Although the success of a GCHE is mainly reliant on the thermal conductivity of the subsurface, all three parameters must be taken into consideration during the exploration process. These surface measurements are then used to determine the required borehole length and stimulate heat exchanger water temperature to evaluate all possible energy savings. Undisturbed surface temperature is inferred from maps of the shallow subsurface temperature taken between drilling intervals or is deduced from atmospheric data. Surface heat capacity normally doesn’t vary much among geological materials and most heat exchanger systems show little sensitivity to the heat storage capabilities of the materials that surround them. Where the sensitivity of the ground heat exchanger lies, is in the hands of the subsurface material’s thermal conductivity. 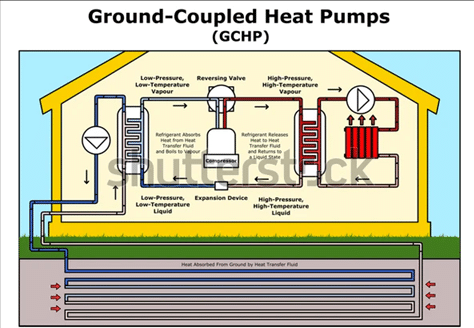 Influence of thermal conductivity on a GCHE

Measuring the thermal conductivity of the subsurface

Renewable energy technology is continuing to advance in the geothermal energy sector, specifically surrounding the development of more accurate and less expensive methods to quantify important geological properties such as thermal conductivity. The development of more modern methods and equipment will help lower the barrier to entry for designing ground coupled heat exchangers and allow them to become a more obtainable development for a homeowner. Aside from a somewhat extensive exploration and installation process, the benefits of geothermal heating and cooling systems are vast and can help the planet recover environmentally by being an economically friendly alternative to conventional fossil fuels. Changes such as this to the way energy is tapped into and redirected for everyday applications can push society in the right direction towards meeting the United Nations’ sustainable development goals and keeping us on track towards a greener and cleaner future on earth.

Temperatures at the Surface Reflect Temperatures Below the Ground. (n.d.). Retrieved October 6, 2021, from https://www.usgs.gov/natural-hazards/volcano-hazards/temperatures-surface-reflect-temperatures-below-ground

What is Geothermal Energy? How Does it Work? (n.d.). Retrieved February 9, 2022, from https://www.twi-global.com/technical-knowledge/faqs/geothermal-energy/home.aspx