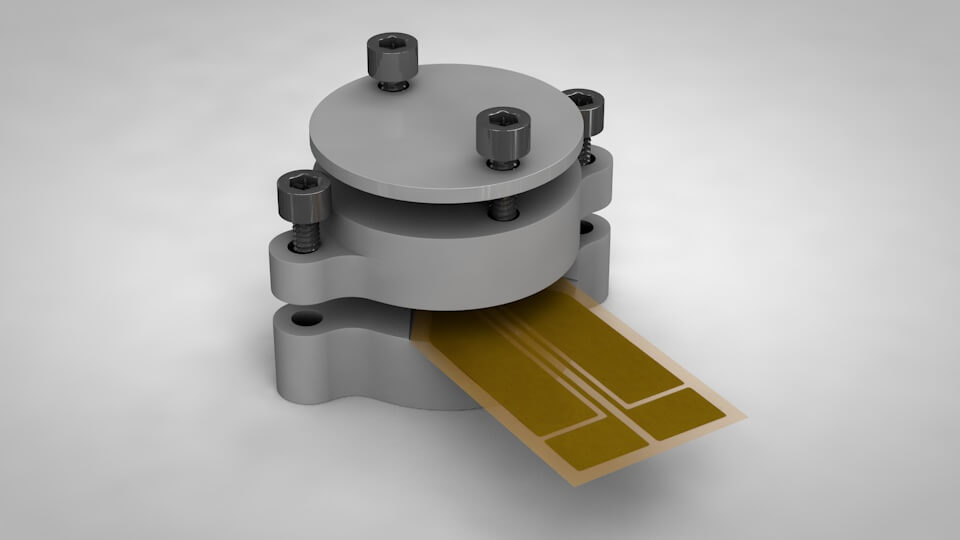 Old techniques used to measure the thermophysical properties of polymer melts were dangerous, messy, and risked damaging the sensor. However, the new polymer melt cell, designed by Thermtest Inc., makes it possible to safely and accurately measure thermal properties, for instance, the thermal conductivity of polymers, from the solid state, through a melt, and into the liquid state. Thermally conductive polymers are for the most part not thought to be immediate drop-in substitutes for metals. Rather, they open up a wide scope of new open doors for “thermal management” applications.

What is a polymer and why is the thermal conductivity of polymers important?

First things first, what exactly is a polymer? A polymer is defined as a material made up of many similar repeating structures (Figure 1). For instance, plastic is a great example of a synthetic polymer. As a matter of fact, synthetic polymers are available in many forms and are typically produced through an extrusion process. Plastic is an important material in today’s society; millions of pounds are manufactured and developed each year. Because of a wide variety of applications, it’s imperative that the thermal conductivity of polymers is properly measured. Provided that commercial applications process raw polymers between 150-400 °C, it is important to thoroughly understand their thermal properties at molten temperatures. Not only is understanding the thermal conductivity of polymers important for assembly, it is also important for the performance of the final product as well. In this case, the transient plane source method is useful for these applications.

Figure 1. A polymer is made out of numerous molecules that are repeating structural units called monomers.

Getting to Know the Transient Plane Source Method

The transient plane source (TPS) technique is a fast and reliable method to test the thermal properties of solids, liquids, pastes, and powders. The TPS method is based on a spiral nickel sensor, insulated in a Kapton© film (Figure 2). The sensor simultaneously emits heat and measures the voltage drop across the sample. Thermal conductivity, thermal diffusivity, and specific heat can then be calculated from this voltage measurement. Typically, the thermal conductivity of polymers is an intermediate value between 0.1 and 0.4 W/mK; well within the testing capabilities of the TPS instrument. 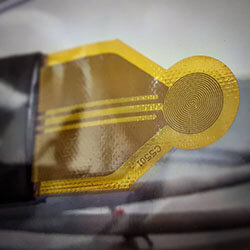 Past Method to Test the Thermal Conductivity of Polymers

In the past, measuring the thermophysical properties of plastics was rather difficult. This was mainly due to the phase transition, and therefore sample melting, at high temperatures. Historically, the transient line source technique was used to determine the thermal properties of molten polymers, until the TPS method was adjusted to perform measurements on polymer pellets. This new technique inserted the sensor vertically into a container filled with polymer pellets, rather than horizontally, as shown in Figure 3. This method is less than ideal, as the TPS sensor cannot be easily removed from the re-solidified sample, without potentially being damaged. As a result, researchers here at Thermtest have been actively working to produce an effective method to test the thermal conductivity of a polymer through its melt. The newly developed polymer melt cell, to be used in conjunction with the TPS system, can safely and accurately measure the thermal properties of polymers through a melt. The use of this melt cell allows for an easy cleanup and does not risk damaging the sensor.

Figure 3. Past setup for testing the thermal conductivity of plastic. 1

Using Ice Cream to Understand the Thermal Conductivity of Polymers

One of the most important parts of the melt process is the ability to control the growth and expansion of the polymer sample. Imagine trying to measure the thermal properties of a scoop of ice cream while it’s sitting in the hot sun. The shape of the ice cream scoop will change significantly as it melts into a puddle (Figure 4). Unlike a tub of ice cream, whose shape will look almost the same, even after it melts. This same theory can be applied to the melt cell, as its main goal is to contain the sample. The melt cell also ensures that the polymer will maintain the same configuration during a melt, so deformations do not form and affect measurements. 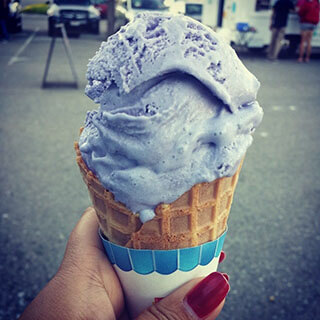 Figure 4. Like polymers, the shape of the ice cream scoop will change significantly as it melts. 4 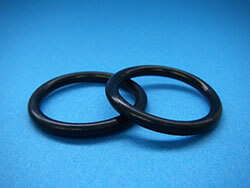 As previously introduced, the design of the polymer melt cell focuses on containing polymer samples through a melt. To do this, a Viton© O-ring with an outer diameter of 25.3 mm, and thickness of 3.2 mm, surrounds the material in the sample holder to keep it in place. Numerous tests were conducted to determine the perfect O-ring material. Other O-ring materials that were tested include Teflon and hydrogenated nitrile butadiene rubber (HBNR). Teflon however, was not compressible enough to compensate for the expansion and contraction of the polymer during the phase transitions, and HBNR melted at high temperatures. Alternatively, Viton© was chosen due to its chemically resistant nature to a wide range of materials, and its ability to withstand prolonged exposure to high temperatures. On some occasions, Viton© may not be compatible with a given material. Alternatively, a silicone O-ring can be used in this instance.

To separate the molten polymer sample from the melt cell and the sensor, a piece of Kapton© insulation with the same diameter as the O-ring is placed on each side of the O-ring/polymer sample combination. Moreover, as the polymer melts, the Kapton© layers form a seal with the O-ring, inevitably forming a puck-like structure. Another material tested as a possible insulating material was polyether ether ketone (PEEK). However, PEEK was not strong enough to withstand measurements at high pressures and temperatures. Additionally, should the test sample be chemically incompatible with Kapton©, Teflon can be used instead. Now that the background on the polymer melt cell has been established, the set-up must be explained.

Firstly, the polymer samples must be mechanically cut into identical circular pieces, 18.6 mm in diameter, and 3.2 to 2.8 mm thick. Before loading the polymer sample into the lower half of the melt cell, a thin piece of Kapton© insulation is laid on the bottom plug of the cell (Figure 5). Following this step, the Viton© O-ring is placed on top of the Kapton© insulation, and the polymer sample is snapped into place within the O-ring. Next, another thin layer of Kapton© is placed on top of the sample. Likewise, these steps are to be repeated for the sample in the upper half of the melt cell. Additionally, a coat of Boron Nitride is applied to the inner portions of the melt cells to allow for easy clean up, if by chance the sample reacts with the hardened steel. 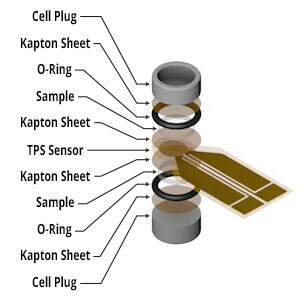 At this instant, the sensor must be placed between the two sample holder halves. Two sensors may be used in conjunction with the melt cell: the HTK 5465, or the HTK 7577 (Figure 6). Although, the HTK 5465 is best used with anisotropic samples, as its larger size allows for more representative thermal conductivity results, the HTK 7577 is smaller and is best used with isotropic samples. Once the sensor is centered on the sample, the upper and lower melt cells are fastened together. 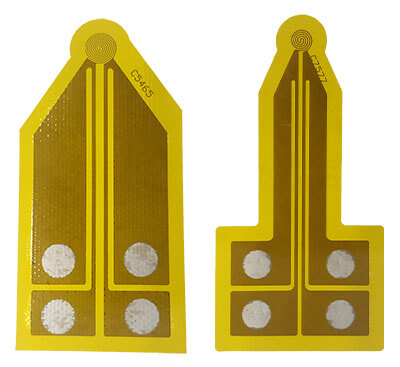 Once both samples and the sensor are in place, a plug is set into the upper melt cell, on top of the polymer sample and Kapton© insulation, and springs are placed within the plug to compress the samples tightly against the sensor. Notably, three springs, of various sizes, are supplied with the polymer melt cell sample holder. Although, researchers at Thermtest have found that the best results are obtained when the two largest springs are used together. Thus, applying approximately 82 pounds of force onto the sample. To complete the set-up, a metal plate is screwed to the top of the upper melt cell to compress the springs (Figure 7). 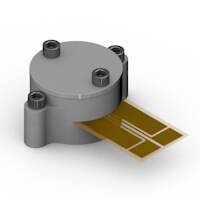 Prior to conducting measurements, the sample holder is placed inside an oven. Correspondingly, the TPS Standard Oven 1 is able to measure up to 300 °C and is used in Thermtest laboratories to test up to four samples at one time, with the help of the TPS Multi-Sensor Switch. Furthermore, once the samples have gone through the melt stage, an imprint of the sensor is left on the polymer puck (Figure 8) to prove that contact was maintained throughout the phase changes. 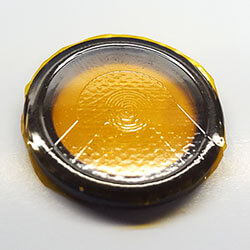 Figure 8. An imprint of the TPS sensor left on the polymer puck.

Below, results from tests conducted on polycarbonate and acrylonitrile butadiene styrene (ABS) in the Thermtest lab, using the polymer melt cell, are outlined. Accordingly, measurements were performed from room temperature to approximately 300°C, in the previously mentioned TPS Standard Oven 1. Five replicate measurements were performed to establish repeatability. Additionally, the relative standard deviation (RSD), the amount of deviation between a set of measurements, was calculated. With this in mind, results are considered repeatable if RSD is less than 2%. The relative difference (RD) compares experimental values with known literature values, and in this case, a difference of less than 5% is optimal. Unfortunately, RD was only calculated for the ambient measurements, as literature values for each temperature interval were not available.

In the final analysis, the results were well within the acceptable range of repeatability, and accuracy (Figure 9). Correspondingly, the literature thermal conductivity value of polycarbonate at room temperature was 0.25 W/mK, and the experimental value was 0.2564 W/mK, an RD of 2.5%, well below the stated accuracy.

In like manner, ABS showed good repeatability between tests, and a high accuracy, as the measured value was within 0.8% of the literature value (Figure 10). 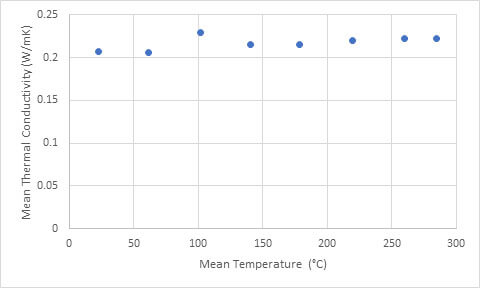 For more information about the thermal conductivity of polymers, please visit the Polymers Applications page.