Yurts are one of the oldest, continuously used living structures in the history of mankind. Most of its ability to withstand the test of time can be attributed to their durability, portability, and cultural significance. Yurts or ‘gurs’ in Mongolia were an extremely popular, portable housing option for ancient nomadic tribes that roamed the Central Asian Steppe thousands of years ago. This vast, flat grassland lies between Hungary and China and is known to regularly experience dramatically cold temperatures and high winds, which prompted these tribes to construct a home that could tolerate these less-than-ideal conditions. Nomads were also known to relocate several times a year, so the yurt was designed to be easy to assemble, dismantle, and transport. Its components were light and compact enough to require only a single horse or oxen to transport them across great distances. What makes these structures so unique is their extremely effective insulation abilities. The insulative panels used in a yurt were somewhat revolutionary regarding their ability to resist heat loss in a region that was prone to experience temperatures below -50°C, at a time when little was known about the way of the role thermal conductivity and heat transfer mechanisms of a material played in determining its ability to restrict the flow of heat. 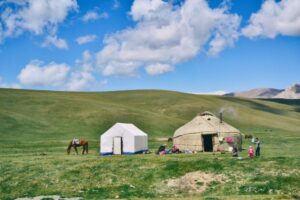 Figure 1: Yurt in the Kyrgyz mountains

Components of a yurt

The insulative panels used to construct a yurt are traditionally made from sheep’s wool or felt and can be layered according to the surrounding climate conditions or season. In the winter, as many as 8 layers of insulation surround the yurt’s circular skeleton that can subsequently be removed in the spring once the weather starts to warm up. The thickness of these panels also reflects the surrounding climate conditions with a thickness of roughly 50mm. If the yurt is located in an area that experiences a dramatic increase in temperature throughout the summer months, the entire wool panel can be swapped out for panels that are made of reeves that allow more airflow to flow through. The skeleton or backbone of the yurt that the insulation panels are placed on is composed of a wood lattice with wooden boards oriented in a crisscross pattern that expands like an accordion. The most popular woods for building this lattice structure include willow, hazel, tamarack, or Siberian pine. Each wooden board connects at a central location or a ring which is also known as the crown. This ring is present in the middle of a yurt and normally remains partially open to assist with air circulation or can act as a chimney in a stationary yurt that has a fireplace installed. 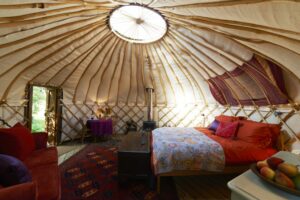 The yurts’ introduction to North America

It wasn’t until the 1960’s that these ancient Eurasian dwellings made their way overseas to North America when William Coperthwaite first introduced yurts to the United States. They quickly gained popularity as a more structurally sound alternative to a tent that would be able to better withstand unfavorable weather conditions. Since its introduction to Western society, the yurt has undergone several modifications, including replacing the waterlog susceptible wool insulation with a waterproof canvas or vinyl material that possesses similar insulative abilities. Many yurt owners have also upgraded them with modern appliances such as hot tubs, saunas, windows, skylights, electricity, and plumbing. Despite the inclusion of many modern amenities into the design of a yurt, to fully appreciate the full ingenious extent of these structures, it is still extremely important to recognize their cultural history before they became modernized and adapted by western cultures. 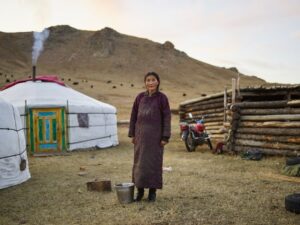 Figure 3: Yurts in the countryside

As the urban sprawl continues to encroach on what is left of our natural world, more individuals are taking the time to leave their busy city life behind and spend time experiencing nature. Yurts offer an environmentally friendly alternative to RV camping that is still more comfortable and homelike than pitching a tent. Because yurts are often mobile, they leave a little footprint on the earth they reside on as they are often packed up and transported to another location Those staying in a central location for an extended period will be built on a wooden or metal frame normally near a well-drained area to avoid any ground flooding or insulative waterlogging. The materials that are used to make the insulative panels of a yurt are normally natural and renewable and demand little energy in terms of their production.

The appeal of escaping the busy city life by camping in a yurt is gaining traction in North America as yurt manufacturing companies have experienced a constant increase in sales of roughly 10% every year. With the average price of yurts being only $4000 for a basic model, these tiny homes are an economically affordable alternative to conventional RV camping. The sky is the limit for modifications that can be done to a yurt to transform it into a more modern and comfortable living space. The lack of beams on the inside makes it easy to fully maximize the entire single room structure. Yurts are now being used worldwide, with manufacturers and distributors popping up in Costa Rica, New Zealand, and Australia. Although these simple structures can persist in a range of environmental conditions, it is still extremely important when designing a yurt to select insulation panels that are best suited for the yurt’s climate. Choosing the ideal thickness and material for insulation will help maintain the most comfortable internal climate and further reduce any additional energy demands of the yurt. 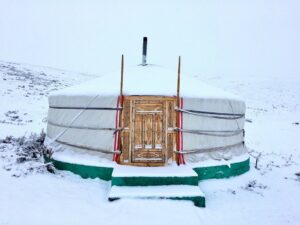 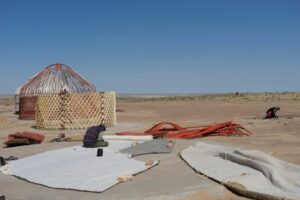 Despite the important role heat transfer plays in maintaining yurt quality, little research has been devoted to obtaining thermal resistance and conductivity values for yurt materials. Recently, researchers at Thermtest Instruments teamed up with the Groovy Yurt, a yurt manufacturing company based in Ontario, Canada, to attempt to quantify and describe the heat transferring abilities of both loose yurt batting and densely packed yurt insulation. The values were obtained using a heat flow meter that took readings at a mean temperature of 30°C for a duration of 25 and 55 minutes, respectfully. Loose yurt insulation displayed an average thermal conductivity value of 0.0545 W/(m/K), slightly higher than the average value for compact insulation, averaged at 0.03 to 0.0405 W/(m/K). The insulation abilities of a yurt offer a slight improvement to conventional wood fiber insulation that has a thermal conductivity value of 0.06 W/(m/K). Cotton wool insulation has a slightly lower thermal conductivity value with an average of 0.02 to 0.03 W/(m/K). The increase displayed in the groovy yurt fabric is due to its elevated level of water resistance. However, this slight decrease in heat capturing abilities is compensated for by the increase in longevity and durability that this extra coating provides. 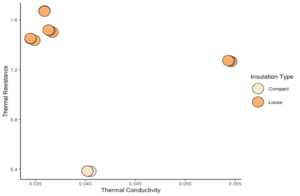 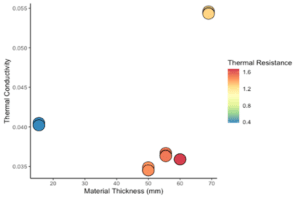 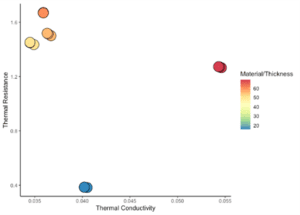 The key to a yurt’s success and ability to withstand harsh and variable weather conditions lies in its fabric. This flexible and thermally responsive material offers a variety of benefits in terms of regulating heat loss and providing an additional level of safety and comfort to the yurt’s occupants. As these ancient structures continue to gain popularity in the camping industry, it is important to acknowledge and appreciate the level of advanced design that was dedicated to their construction over three thousand years ago. The innovation displayed by nomadic tribes of eastern Eurasia is still providing insight to today’s engineers as they continue to search for ways to improve everyday living in ways that will reduce the energy demands of society and guide our planet towards a greener future.

Want The Facts on Yurt Insulation and Reflective R and E-Values? (n.d.). Retrieved April 8, 2022, from https://rainieroutdoor.com/blog/yurt-living/yurt-insulation/

What Is a Yurt? Everything To Know About Camping Or Living In A Yurt. (n.d.). Retrieved April 7, 2022, from https://www.rockethomes.com/blog/homeowner-tips/yurt