Fossil fuels are one of the most common and widely exploited sources of energy in the world. These carbon-enriched fuels are formed from the decomposition of plant and animal material that is acquired by drilling and mining deep below the earth’s surface. The burning of this deep earth organic material provided 80% of total global energy in 2013, with petroleum products being the dominant form of all exploited gas products. Other less desirable types of fossil fuels include natural gas, oil shales, and coal. Despite there being numerous advances in the development and design of alternative, environmentally friendly energy harvesting methods, fossil fuel and petroleum sourced energy is still expected to account for 78% of all energy used throughout the next decade. The heavy reliance that society has on fossil fuels places a strong emphasis on the importance of designing safe and effective fuel transportation and recovery techniques in order to properly exploit this resource. The methods and thermophysical properties required to design the most appropriate and efficient oil transportation equipment are likely to remain an extremely important topic among pipeline engineers for decades to come. 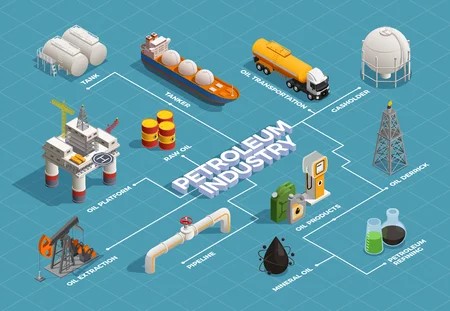 Figure 1: Illustration demonstrating the various components of the petroleum and gas industry

Petroleum is a naturally occurring mixture of hydrocarbons and other compounds. It can contain a variable number of elements including sulfur, nitrogen, and oxygen. This industrial oil also has the potential to be contaminated with trace amounts of metals including but not limited to nickel, iron, and vanadium. Petroleum isn’t confined to a liquid state as it can also occur as a natural gas, semi-solid such in the form of bitumen, as a solid wax or asphaltite. Petroleum is often referred to as crude oil when it occurs as a liquid. This dark and viscous fluid normally contains a number of dissolved volatile compounds such as alkanes (carbons numbered 1-4) and non-hydrocarbons including Nitrogen (N2), Carbon dioxide (CO2), Hydrogen sulfide (H2S), Helium (He) and trace amounts of water. Although crude oil lacks a heartbeat or a pulse, it is frequently referred to as “live” or “dead.” A crude oil that contains a large amount of dissolved gas is referred to as live oil whereas one that lacks a significant quantity of gas is known as dead oil. Most petroleum products used for everyday applications, including the gasoline present in the engine of a car, is “dead oil”. The hydrocarbons present in crude oil can consist of a variety of different organic molecules all of various sizes and molecular weights that have a composition mirroring their location, age, and the depth of the reservoir from which they were sourced. 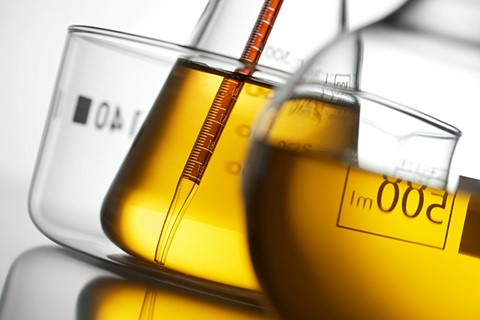 Figure 2: Liquid petroleum products as they would appear within a laboratory setting

Effect of Thermal Conductivity and Viscosity

A variety of thermal and physical parameters need to be considered in order to ensure the safest and most energy efficient transportation of crude oil and gas products through a pipeline system. Thermal conductivity and viscosity are two thermophysical properties that stand out in terms of the effect they have on the proper exploitation of fossil fuels and crude oils. Thermal conductivity describes the ability of a material or object to transfer heat through it. The higher the thermal conductivity value of a material, the more efficiently and quickly heat can pass through it. The value for thermal conductivity is generally reported in W/(m/K). Viscosity of the pipe fluid can have an equally profound effect on its transportation efficiency and can be regarded as the amount of internal friction a substance possesses that restricts its ability to flow. Substances with a higher viscosity will behave similarly to a sticky fluid such as honey whereas a substance with a low viscosity will be able to move more smoothly like water flowing out of a tap.

The thermal conductivity of petroleum plays a crucial role in extraction efficiency, product quality, and feedstock suitability hence, the need to design specialized temperature measurement strategies in order to quantify these values accurately. Thermal conductivity can directly relate to the optimization of heat exchanger controls, preventing pump damage and ensuring the quality of the final product.

A pipeline will encounter several different environments in a single stretch, all of which can inflict a range of effects on the thermophysical properties of the petroleum product housed within them. For example, suppose a pipeline starts 600km offshore in an ocean production well and then follows a seabed up a continental shelf where it eventually reaches land to be tapped into for energy exploitation. Throughout this entire stretch of pipeline, heat transfer is constantly occurring at a rate that is heavily dependent on both the thermal conductivity of the oil in the pipe and the materials that surround it.

Figure 3: Deep Ocean oil rig that would source crude oil to be pumped back to shore

Most heat transfer that is experienced in a pipeline system is by advection which involves physically moving something from one place to another. A prime example of this heat movement method occurs when hot oil is actively pumped into a cold pipeline. The physical pumping action moves a significant amount of heat that was contained in the product where it displaces the existing fill of the pipeline or proceeds to fill up the empty pipe. The degree of advection occurring within a pipeline system can be manipulated externally by altering the rate of heat of transfer, heat flux and the velocity at which the oil is being pumped. This ability for engineers to manipulate the heat transfer rate allows them to better control and safely monitor the petroleum product as it migrates through vast stretches of pipeline.

Advection isn’t the only heat transfer mechanism acting on a pipeline as heat can also be transported by conduction when there is a direct thermal path between areas with different temperatures. The dispersal of heat through conductive mechanisms has been of the utmost interest to geologists researching the effects that the thermal conductivity of the surrounding rocks will have on the thermal evolution of oil-bearing basins and gas exploration projects. A buried pipe for example, maintains physical contact with the backfill, therefore setting up a direct thermal path for heat conduction to occur between the hot petroleum product in the pipe and earth or water surrounding it. Sometimes, heat transfer from a non-flowing fluid in a pipeline becomes important for assessing its changing hydraulic conditions and what force may be required in order to reinstate fluid motion after a power outage. 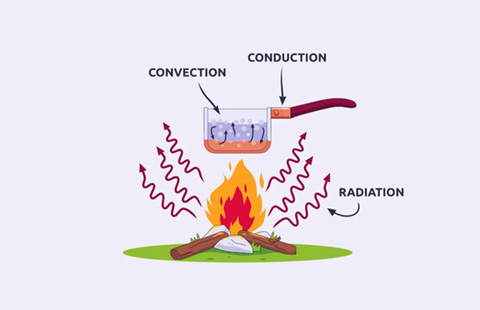 Figure 4: Simple illustration of the various modes of heat transfer including conduction, convection and radiation

Convection is another mechanism of heat transfer the often results from any fluid motion that occurs over the thermally active surface of a hot pipeline when it is located beneath a body of water. Ocean currents passing over a submerged pipe, or wind blowing over an elevated pipe can inflict similar convective heat loss on the internal fluid located inside of it. Radiation is a more complex form of heat movement experienced by a petroleum pipeline and normally occurs in the form electromagnetic radiation heat loss. The most common example is the heating of an exposed pipe by incoming sunlight that proceeds to reflect this acquired heat back out into its surrounding environment. Most of these heat transferring mechanisms can be mapped on a pressure-enthalpy diagram in order to determine locations along the pipe that may be especially sensitive to temperature related issues. Heat transfer issues are less common on well-designed pipelines; however, it is still important for thermal engineers to be able to quantify the heat transfer that is occurring in a pipeline system in order to be aware of any issues that may arise during the oil transportation processes. 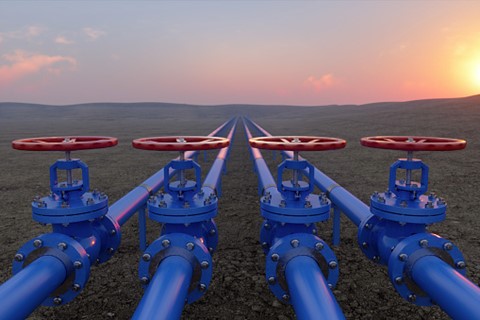 An alternative to measuring heat flow using the relationship between pressure and enthalpy is determining the thermal conductivity of the petroleum oil within the pipe using the Transient Hot Wire method. Testing conducted on crude oil samples at the Thermtest Europe laboratory located in Sweden showed that the thermal conductivity of oil is rather insensitive to changes in temperature that fall within a range of 273K to 323K. The thermal conductivity of crude oils of various ages was determined to fall between 120 W/(m/K) and 130 W/(m/K) over this quoted 50K temperature range. These values align with the previously measured and published values for conventional gasoline products that are sourced from petroleum oil and sold at gas pumps for use in the combustion engines of vehicles. The standard thermal conductivity value for gasoline is 120 W/(m/K), within low range of the values reported of oil measured in the Thermtest lab. 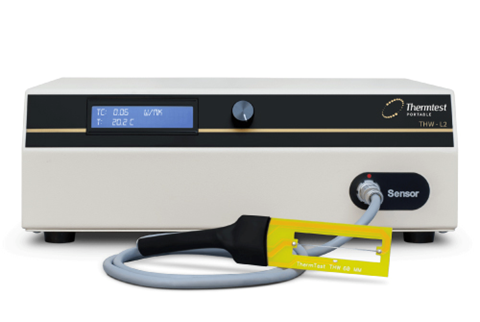 Gasoline is a clear, petroleum derived flammable liquid that is primarily used as fuel in most car and internal combustion engines. The natural components and hydrocarbons that are present in crude oil are separated by fractional distillation in an oil refinery in order to produce gasoline, diesel fuel, kerosene and other similar products. The thermal conductivity of an engine oil relates to its ability to effectively cool moving engine parts. Engine oil needs to have a sufficiently high thermal conductivity value in order to effectively transport unwanted heat away from important engine components in a vehicle. Failure to do so can result in the engine quickly overheating or catching fire, causing a tremendous amount of damage to the car. 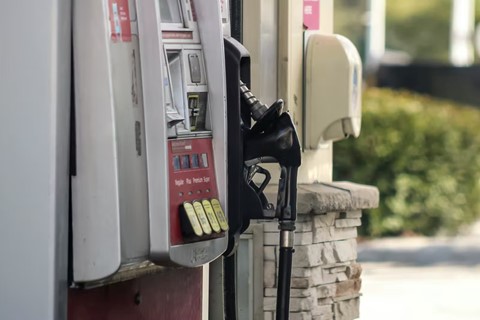 A rule of thumb for determining the thermal conductivity of an oil is that lighter oils will possess a lower thermal conductivity than heavier oils, and the older an oil is, the higher the chance it will contain metal particles that will contribute to an increase in thermal conductivity. An oil with a higher viscosity will often need to be reduced by heating or dilution in order to be effectively recovered or transported for further processing. This heating process will demand additional energy and further increase the susceptibility of the pipeline to heat transfer failure and damage.

Despite the thermal conductivity and velocity of petroleum and fossil fuel being two extremely important parameters for ensuring the successful functioning of a pipeline system, the literature describing measurement techniques and methods for successfully obtaining these values is few and far between. The scarcity of these properties in present-day literature highlights the demand for scientists to continue researching and describing the relationship between energy efficient transportation of crude oil and the thermophysical properties it exhibits. If the demand for petroleum and crude oil products continues to follow its projected trajectory, this is likely to be an area of research that will be receiving a significant amount of attention in the years to come.