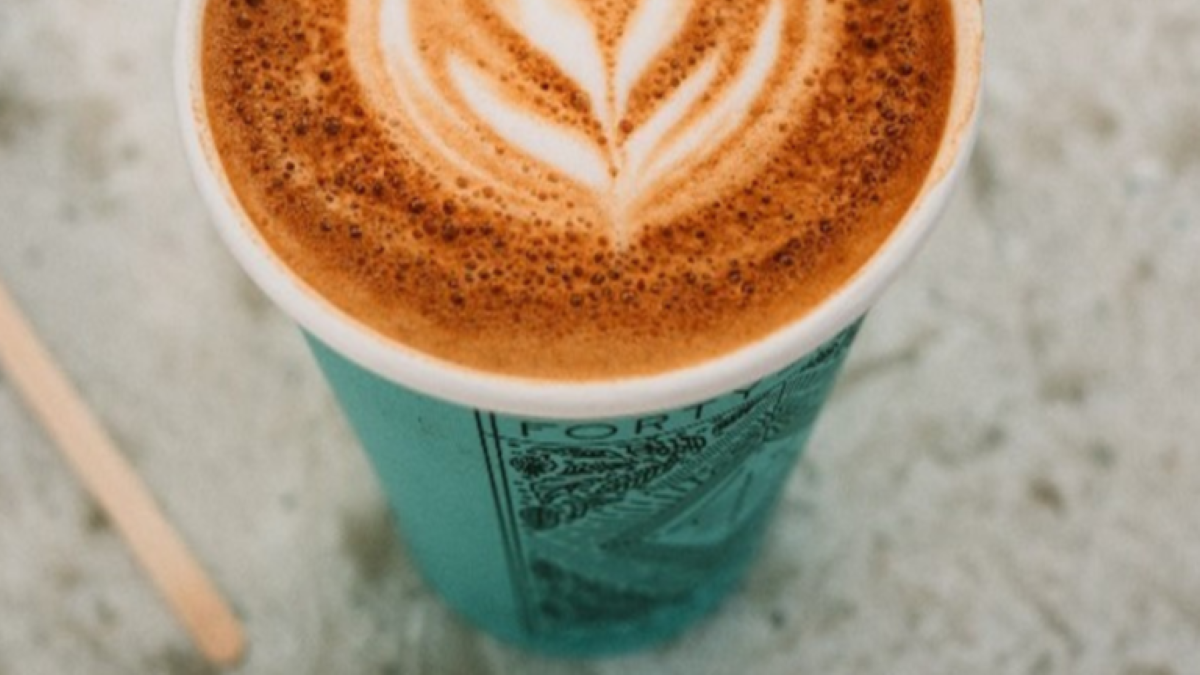 How the thermal properties of the materials used to make disposable cups influences their performance and their environmental impact.

It’s no secret that disposable cups are a major source of environmental pollution due to the non-recyclable nature of the materials they are made. This inability to be recycled or reused, along with their widespread global demand, contributes to an overabundance of disposable cup pollution in landfills, oceans, and natural wildlife habitats across the entire globe. Half a trillion disposable cups are manufactured annually worldwide, and most of these cups contain over 5% polyurethane plastic, which is why recycling is nearly impossible. This plastic, combined with the other materials that are a part of a disposable coffee cup (such as Styrofoam), are resource-demanding and environmentally damaging materials to produce; however, they continue to be used by large fast-food corporations to serve coffee to customers despite these damaging effects being well known. So, what makes this “perfect disposable cup” recipe so irreplaceable? Most of the coffee serving industry’s heavy reliance on these materials for their coffee cups can be directly linked to the cup materials’ thermal properties. 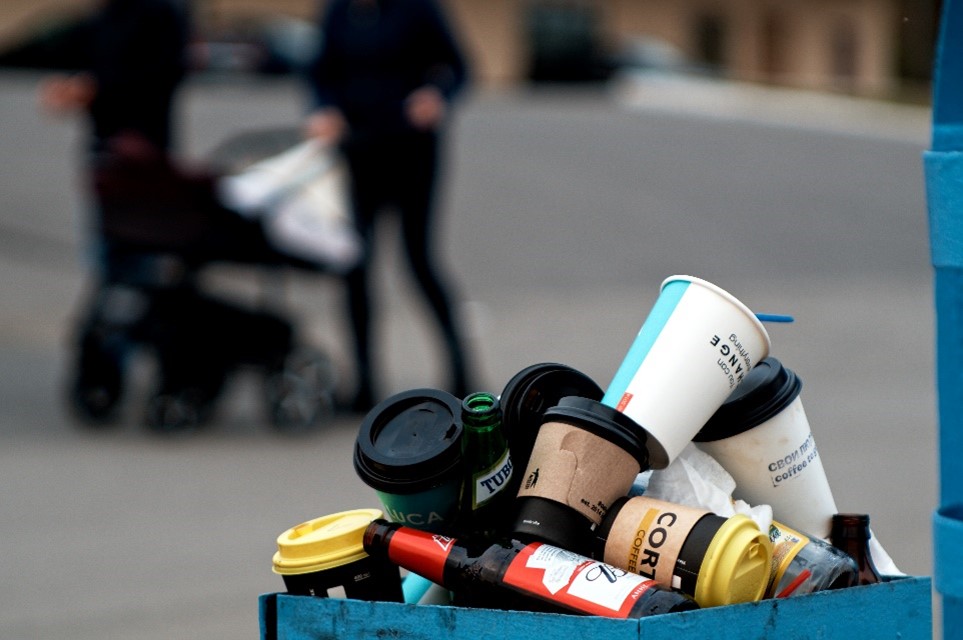 Paper, Styrofoam, and plastic are currently the three most popular materials used to manufacture disposable coffee cups due to their distinct insulative properties. The USA alone accounts for the production of over 120 billion paper, plastic, and foam coffee cups every year, which is about 1/5th of the global total. Out of these 120 billion coffee cups, an astonishing 99.75% of cups end up in the trash where very few of them decompose, and those that do can take upwards of 20 years before they start breaking down 1. Plastic, paper, and foam are all materials that possess a low thermal effusivity and a low thermal conductivity, which makes them ideal for holding hot beverages because they still feel not to hot to the touch even when filled with scalding hot liquid. Thermal effusivity describes a material’s ability to resist heat transfer and can be measured as the rate at which that material can absorb heat. It combines the idea of heat capacity (how willing a material is to lose heat) with thermal diffusivity (how quickly a material willingly gives away heat) 2. The better described Thermal Effusance can be mathematically determined by finding the square root of the product of the material’s thermal conductance and its volumetric heat capacity 3. To block the transfer of heat or block the hot coffee from losing heat to its surroundings, you want a material with a lower thermal conductivity and a low thermal effusivity.

The low thermal effusivity of plastic, paper, and Styrofoam is the defining characteristic that makes these materials irreplaceable to coffee cup manufactures and the fast-food industry as a whole. Each of these materials exhibits unique chemical and physical properties that dictate its insulative abilities. The big players in the fast-food industry, such as McDonald’s, Dunkin’ Doughnuts, and Starbucks, all serve their coffee in a variety of different cups that are comprised of a specific combination of these thermally insulative materials.

Disposable cups are a relatively modern invention that only emerged on the market around 100 years ago as an attempt to limit the use of the public drinking vessel. Although this may seem like a wild and crazy concept in our modern world, the public drinking vessel was extremely common and consisted of a shared tin or glass cup that would be left near drinking fountains for a thirsty individual passing by to use. Lawrence Luellen patented a waxed lined throw away cup that he claimed to be a huge movement towards improvement in the general public’s hygiene and an effort to minimize exposure to diseases such as pneumonia or tuberculosis 4. Although Luellen’s cup arrived long before the emergence of the “to-go coffee” culture, it sparked the idea that the best way to serve a beverage that can be transportable is in a container that can be easily disposed of without the need for additional cleaning. It wasn’t until the 1970’s that Mcdonald’s started serving breakfast, and it was an entire decade later until Starbucks opened its 50th store. These historic events landmarked the beginning of a spike in production and use of disposable coffee cups. They built the foundation of what is now a multi-million-dollar manufacturing industry.

Fast forward to the 21st century, and we are now faced with an overabundance of disposable coffee cups, with the majority being made of either Styrofoam, paper, or plastic. The three giants in the to-go coffee industry, McDonald’s, Starbucks, and Dunkin’ Doughnuts, serve close to $20 billion in just coffee annually 1. With the price of a cup of coffee averaging around $2.00 US each, it is safe to assume that these companies go through plenty of coffee cups to meet this massive consumer demand. For many years, these companies used Styrofoam cups to serve their beverages to customers, which are relatively thicker than paper cups, making them superior insulators despite both materials having almost identical thermal properties and measurements 5. Most foam-based drinking containers are made from expanded polystyrene (EPS), a form of polystyrene plastic filled with tiny air bubbles to enhance the cup’s thermal insulation. Polystyrene and polycarbonate are both hard plastics that have a higher insulative ability and are a safer material than paper in terms of protecting the consumer against leaks and spills of the scalding hot beverage inside the container. Cups with a plastic lining made of these materials also have a higher melting point and are less likely to leach harmful chemicals into the liquid 6. 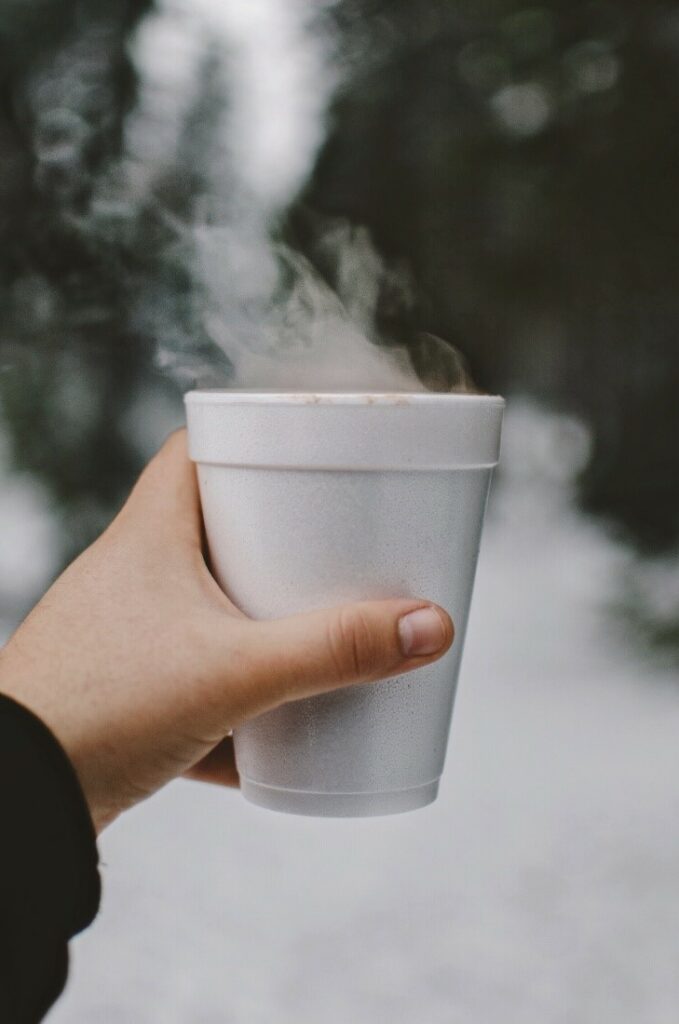 As the harmful effects of polystyrene contamination continue to become more well recognized, many coffee cup manufacturers are switching to mainly producing paper cups. Most of these cups are composed of cellulose paper with a PLA lining (bioplastic derived from renewable biomass) 7. These paper cups are ideal for holding hot and cold drinks that do not contain ice. The PLA coating provides a protective barrier around the paper to prevent it from becoming oversaturated and saggy. This plastic coating also acts as a glue that keeps the seams of the cup secured together. Paper has a substantially lower thermal conductivity than plastic, so by having the paper layer on the outside of the cup, the consumers’ hands will stay protected from exposure to the hot coffee’s radiating heat. Paper cups are normally produced with either a single layer of paper or a double layer. Single-layer paper coffee cups perform extremely poorly when holding really hot liquid due to the dramatic temperature difference between the inside and the outside of the cup that allows condensation to form. This condensation will soak the paper, causing it to lose its rigidity, and the entire cup could potentially collapse. 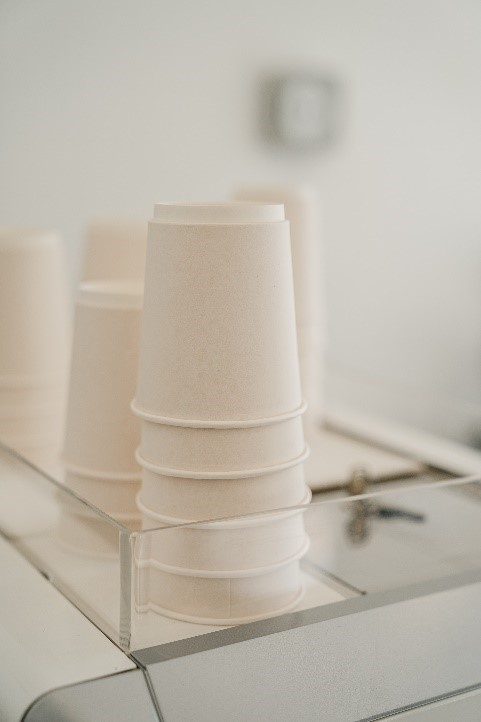 One solution to prevent the paper cup’s loss of rigidity is to incorporate an additional insulative layer. This additional insulative barrier is present in double-layer paper coffee cups, which are essentially a disposable thermos with an air gap between the two layers of paper. This air gap further reduces the thermal conductivity allowing the coffee to stay hotter for longer and provides an additional protective barrier between the consumer and the hot beverage.

The corrugated ripple cup is another popular choice in the disposable coffee cup industry. This design has the lowest thermal conductivity and lowest thermal effusivity compared to both single- or double-layer paper cups. A corrugated ripple cup consists of three layers of cellulose paper and a top layer formed into a uniquely shaped relief structure. This relief structure allows for air spaces to exist between the cup walls so that an individual’s hands are only in contact with the protruding “ripples” on the outside of the cup. This design facilitates more effective heat dispersion and eliminates the need for a coffee cup sleeve, an additional source of waste that is frequently associated with serving coffee 7.

There are some other ways to improve a paper cup’s thermal insulation, with one of the most frequently used methods being the inclusion of a plastic “wrap” that surrounds the outside of the cup. This is popular among many restaurants and business because it provides them with an additional opportunity to advertise their brand on the plastic wrap. Although this paper cup design lowers the cup’s thermal effusivity, it also drastically reduces the cup’s ability to be recycled by extending its decomposition lifetime. 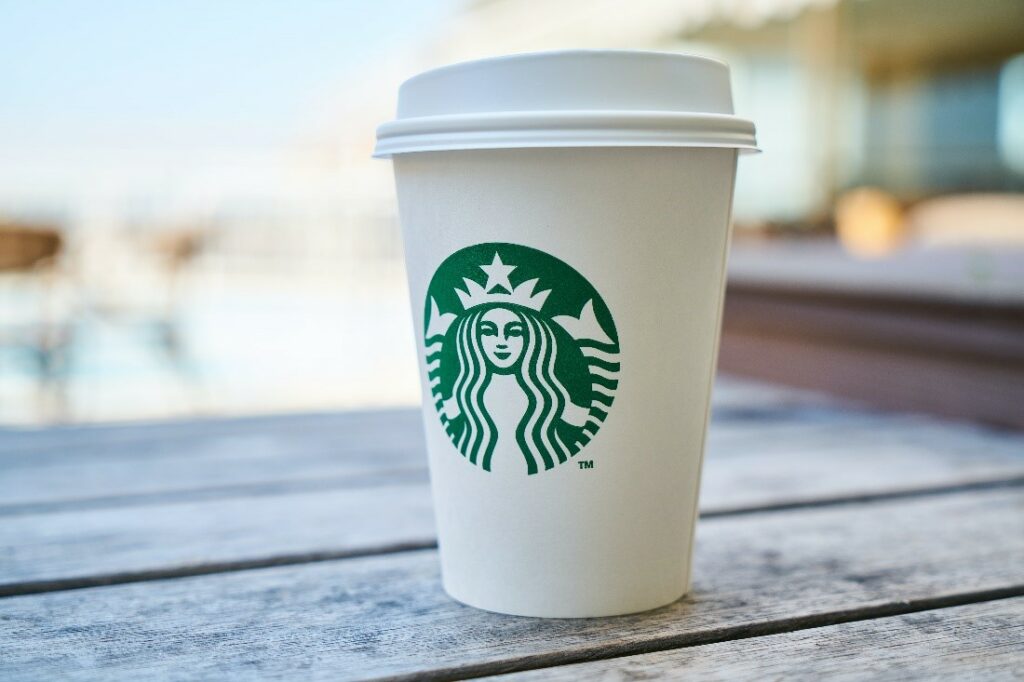 The demand for paper cups has grown by more than 2.3% every year for the past decade as more restaurants are attempting to eliminate their reliance on foam cups that may be contaminating the coffee being served in them.  In September 2013, Mcdonald’s switched from using polystyrene cups to using paper coffee cups. They also set a companywide goal that by the end of 2020, all primary fiber-based packaging will come from recycled and certified sources. McDonald’s also continues to assess the deforestation risks that their packaging manufacturing is inflicting and are taking action to conserve forest ecosystems. Efforts such as sourcing from more renewable natural resources that companies like Mcdonald’s are implementing or putting in place incentives, such as bring your own reusable coffee cup programs, are all steps towards lowering the amount of unrecyclable waste that results from the widespread use of disposable coffee cups. Many consumers are switching to reusable cups and thermoses made of metal with a vacuum-sealed wall between the cup’s internal and external layers. This design harnesses some key thermal components of both metal and air, allowing for coffee to stay warm for anywhere from 4-24 hours. These reusable cups’ ability to provide a thermal barrier between the hot coffee and the cool external environment surpasses the ability of any type of disposable cup on the market that attempts to do that same thing. 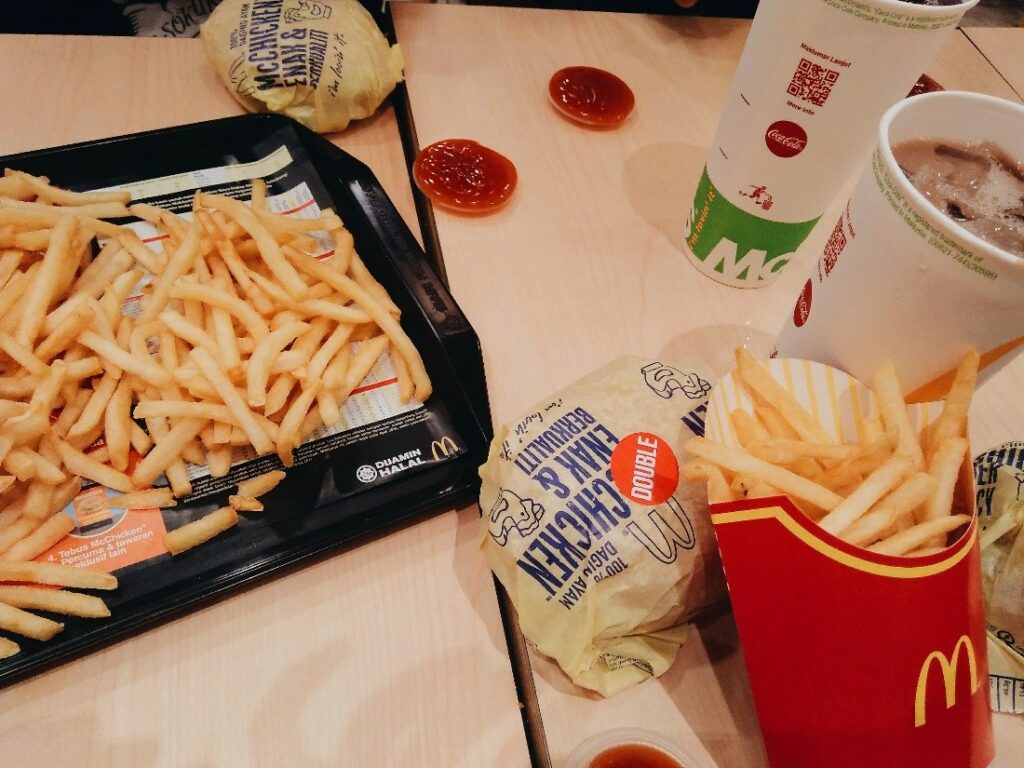 Standard packaging used by McDonald’s for their food service

The design and production of disposable coffee cups focus on harnessing the key thermal properties of certain materials, such as their low thermal conductivity and low thermal effusively. Paper, Styrofoam, and plastic all exhibit a low thermal effusivity (thermal effusance) which prevents the heat radiating off of a hot coffee from escaping into the surrounding environment. The low thermal conductivity of these materials also keeps the cup feeling warm to the touch so that it won’t harm the person holding it. Although these three materials are highly effective in their role of keeping coffee hot, they do inflict a number of negative impacts on the environment and potentially the person drinking the coffee themselves. Big players in the fast-food industry that account for most of the demand for disposable coffee cups such as McDonald’s and Starbucks are continuously implementing new programs that provide customers who bring their own reusable cups with a discount on the purchase of a beverage. These reusable cups generally have better insulative abilities than disposable cups, keeping a hot beverage warmer for a longer period of time.  Some of these restaurants are focusing on new and improved cup designs that are easier to recycle and are made of natural resources that were obtained in a more sustainable way. As a consumer, it is our responsibility to make a conscious effort to use a reusable coffee cup or purchase coffee from a restaurant location that uses sustainably harvested paper for the production of their cups. This effort by consumers will hopefully eliminate the need and demand for disposable cups in general and continue to allow research efforts to be focused on enhancing the thermal design of reusable cups instead.