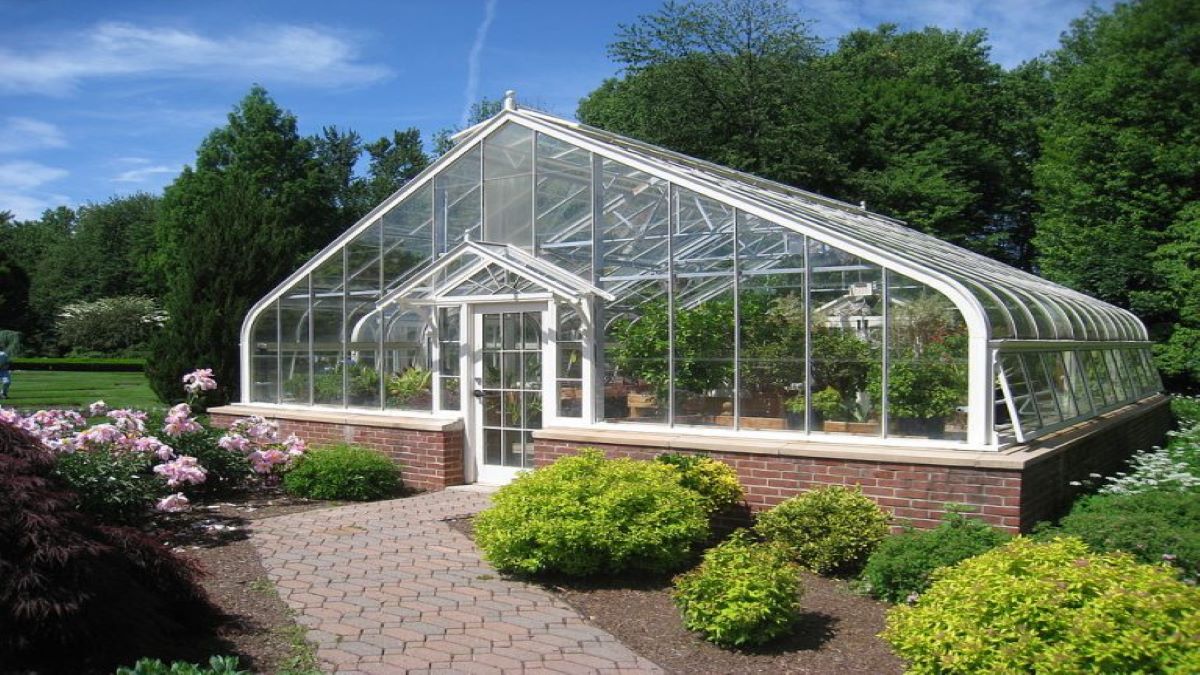 Altering soil and building materials of greenhouses to benefit the environment and create an optimal growing climate for crops.

Impacts of Soil Conductivity on Greenhouses

Natural geological processes have been impacting rock and soil formation since the first biotic organism appeared on earth roughly 4 billion years ago. Living organisms and soil have an important symbiotic relationship as they are both key components of many ecosystems. The introduction of humans 66 million years ago has led to an extreme imbalance in the relationships between living and nonliving components of our earth. Some of the most damaging anthropologic impacts can be observed by analyzing soil. Without healthy and fertile soil, the current global population of 7.3 billion would not be able to be sustained.

Climate change and population growth are both increasing at an exponential rate. Current industrial practices need to be modified and new technologies need to be developed in order to combat these damaging environmental impacts. One way to achieve this is to harness the maximum thermal potential of soil for optimal growth of fruits and vegetable year-round using a greenhouse with specialized varieties of mulch and constructed of specific materials.

The average global temperature is predicted to increase by 0.1°C every decade. This small temperature increase will have costly effects on the earth’s ecosystems, potentially destroying some entirely. Climate change has been at the forefront of multiple major government decisions over the past decades, however, very few protocols and regulations have been implemented. Environmental impacts need to start being taken into more consideration when engineering and designing new technologies, as well as modifying existing ones. The global population is estimated to increase to 9 billion by the year 2050 which would demand a 70% increase in global food production. Using the current agriculture growing techniques and technologies this increasing demand would not be able to be met.

Agriculture specifically for crop growth is currently using an estimated 1.2 – 1.5 billion hectares of land, that doesn’t account for an additional 3.5 billion hectares being grazed by livestock. Research is consistently attempting to uncover new planting designs, fertilizers and soil mixtures that can increase the fertility and productivity of a growing area. A greenhouse environment is one that can be easily manipulated to create a favorable microclimate that can lead to an increase in production rates.

New technologies are being developed that are attempting to increase the productivity of greenhouses so they can be implemented as an effective agricultural strategy to combat climate change.

A study conducted by (K. Mesmoudi, KH. Meguallati, PE. Bournet) analyzed the impacts of adding a mulch mixture to the top layer of soil in a greenhouse environment. This study was conducted in the late fall/early winter season in a temperate climate (night time temperature ranging 5 – 10°C). The objective of this study was to compare the impacts of transparent mulch (containing plastic), black mulch and a normal mulch mixture on the thermal conductivity of the soil and crop production levels. 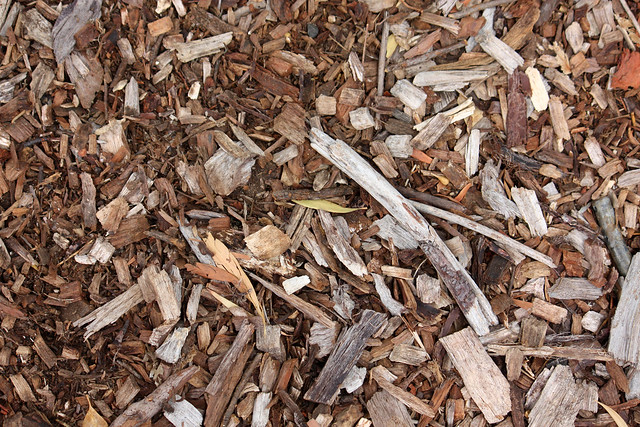 A greenhouse ecosystem is impacted by multiple feedback loops that are occurring between the soil, air, vegetation and cover flux. The ecosystem component analyzed in this study was soil. Mulch is a form of soil that acts a barrier to protect against evaporation. Evaporation is the only heat transfer medium that always lowers a materials internal temperature. Less evaporation in a greenhouse will naturally lead to an increase in soil temperature.

For the experiment, each category of mulch was observed in a ventilated and non-ventilated greenhouse. All three mulch varieties displayed extremely different results in each greenhouse conditions. The black mulch soil had a much lower albedo (reflected less light) so it was ideal for a greenhouse located in a colder climate. However, the black mulch provided less photosynthetically available radiation (PAR) which would have the potential to impact crop growth. Black mulch also increased the soil’s thermal conductivity and assisted in weed control. Low height, young fruit and vegetable crops generally displayed a higher production level in black mulch conditions.

The addition of plastic particles to a mulch mixture increased the heat capacity of the soil in a higher temperature environment; however, transparent mulch does not retain heat when the air temperature starts to decrease. It was also noted that open vents can lead to higher convection levels and remove heat faster from the transparent mulch. This could be favorable in a high temperature environment were crops and root zones are at risk for overheating.

The thermal conductivity of the transparent and normal mulch both increased dramatically when a higher moisture level was introduced. The study concluded that the addition of black mulch in a ventilated greenhouse creates an environment with an ideal soil thermal conductivity for increasing crop production rates.

A large variety of materials are frequently used for the construction of a greenhouse. The most commonly known material is glass; however, glass is the least energy efficient material to use for greenhouse panels. PVC fabric (polyvinyl chloride) is the best material to use for increasing heat conservation due to its high thermal resistance and insulative properties (figure). PVC fabric can also withstand heavy snowfalls and increases insulation in colder climates that experience a lengthy winter. 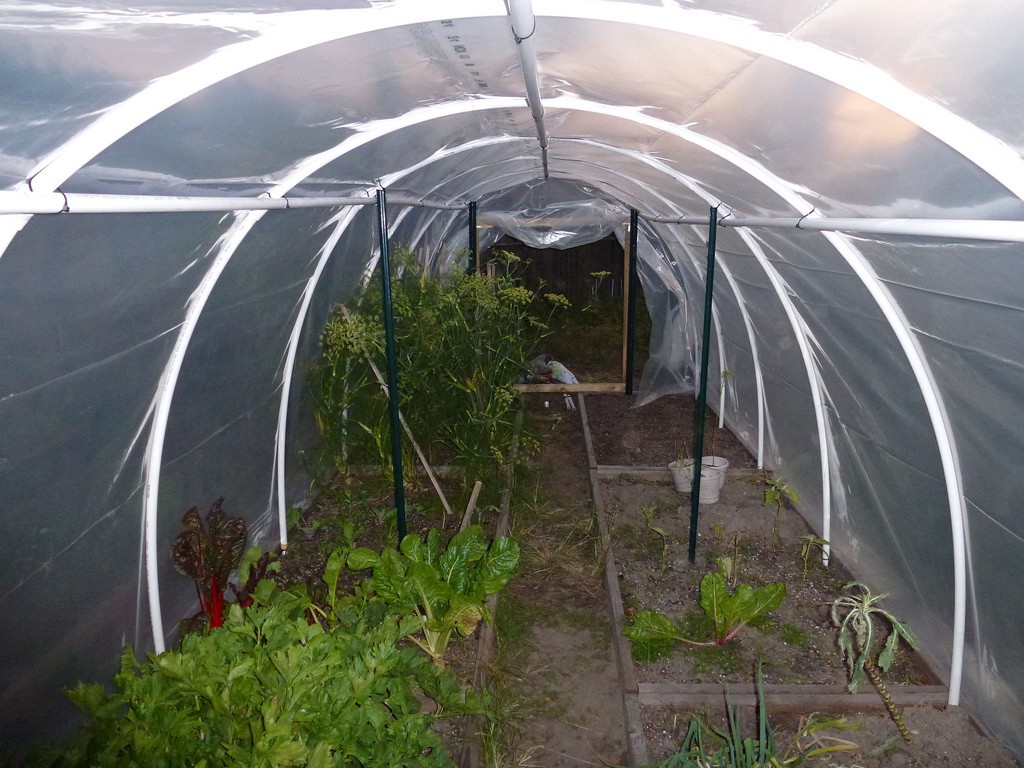 Gravel, dirt and concrete are all materials that are commonly used for the foundation of a greenhouse. Gravel and dirt do not retain heat as well as concrete and have a lower thermal resistance and poor insulative properties. Porous concrete is the ideal material for constructing a greenhouse foundation. The pores in the concrete mixture allow for easy water drainage and can more easily retain heat. Planting crops in black pots and surrounding the area with brightly painted objects can increase the amount of heat energy received by the plants and in turn increase overall production levels.

Climate change is occurring at an alarming rate and will continue to do so if current agriculture practices do not become more sustainable. Encouraging the use of greenhouses to replace conventional agricultural growing methods is just one example of sustainable production without placing a higher strain on earth’s resources. If some additional adjustments are made to greenhouse growth such as building materials and growing mediums, then these infrastructures can become even more energy efficient. Every small improvement counts towards a healthy planet that can keep sustaining human life for millions of years to come.